‘The Man With the Answers’ 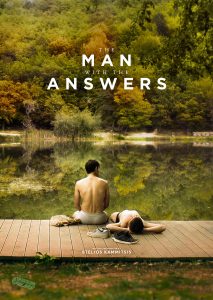 “The Man With the Answers”

The title of this film may be the man with the “answers,” but I found it left me with more questions than anything else. This undercooked gay romance/road trip tale suffers from a significant lack of character development and narrative direction, consisting primarily of a series of disjointed, mostly unexplained events strung together by an episodic, meandering script. This road trip through Europe, extending from Greece to Italy and to Germany, provides the backdrop for a slow-simmering relationship between two opposites – a reckless free-spirited student and an uptight, über-responsible former diving champ. While the “answers” that arise during their journey always seem perfectly suited to meeting the duo’s needs, they come about so synchronistically that they often defy believability – and frequently provide the requisite conflict that drives the on-again/off-again nature of the protagonists’ relationship. But, given the lack of explanation for and development behind all this, the end result is a story that seems lazy and all too convenient in its execution. Director Stelios Kammitsis’s sophomore effort is more sophomoric than anything else, showing that the evolution of this filmmaker’s career is going to need a lot more spit and polish if it’s going to take off.