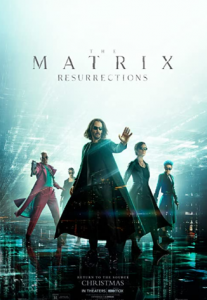 In the interest of full disclosure, I’ll start off by saying I’ve never been a big fan of “The Matrix” franchise. I’ve found all of the installments to be long-winded exercises in metaphysically oriented intellectual masturbation broken up periodically by stylish action sequences and glitzy special effects. And, regrettably, this latest sequel is mostly more – a lot more – of the same, a picture that could have easily (and more accurately) been titled “Another Matrix Movie.” What’s especially disappointing here is that the film actually starts out with some promise, presenting a narrative in which the picture hints at being a delightful send-up of itself. It also includes some interesting allusions to the lack of meaningful distinctions in contemporary political parties and the public’s often-sheep-like responses to the dictates of officialdom. And there’s some pleasant humor served up in the supporting performances of Neil Patrick Harris and Yahya Abdul-Mateen II. However, despite these fine attributes, this overlong slog runs out of steam quickly, relying on nostalgic flashbacks from the franchise’s previous installments and trotting out an increasingly tiring series of explosions, fights and bombastic special effects to carry a story that becomes so convoluted it’s hard to imagine it holding anyone’s attention (even those who are metaphysically oriented like yours truly). At bottom, there seems to be little to characterize this latest sequel other than it being a vehicle to provide its distributor with yet another cash cow and director Lana Wachowski (sans sibling Lilly) with an opportunity to redeem herself  in Hollywood circles (at least at the box office) after several disappointing outings. As a consequence, though, the film fails to deliver much of anything new, fresh or exciting, instead presenting viewers with a release that might have been more aptly called “The Matrix Retreads.”