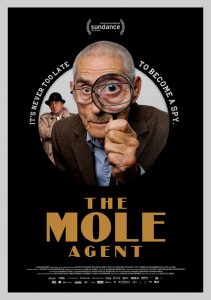 When the daughter of a Chilean nursing home patient suspects that her mother is being subjected to elder abuse and theft of her possessions, she hires an investigator to verify the claims through surveillance conducted by an elderly “spy” he recruits to check in as a temporary resident. What the mole finds, however, doesn’t exactly jibe with the accusations but, instead, reveals a very different truth about what it’s like to be a resident of one of these facilities. Despite this, though, director Maite Alberdi’s latest documentary offering struggles with telling its story, leading viewers to believe it’s headed in one direction while actually moving in another less-than-apparent manner, one that’s not well delineated until the film’s closing moments. What’s more, it’s not always clear just how much of a “documentary” this release really is, given a premise that seems to be more than a little “planned” in nature. Also, its attempts at humor, though cute at first, fade as the picture progresses and reveals a more substantive, serious narrative, one that makes its comedic material look cheeky as a consequence. There indeed is an important message here, but its presentation deserved better treatment than it received in the finished product.