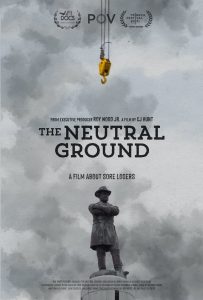 Aptly subtitled “A Film About Sore Losers,” this superb debut documentary feature by director C.J. Hunt draws upon a modern-day Battle of New Orleans – one centered on the contentious removal of four statues glorifying the Confederacy approved by a vote of the city council – as a means to set the record straight behind what its proponents were actually commemorating with these landmarks, namely, the celebration of a failed social system based on sanctioned slavery and white supremacy. In exposing the false narrative that has kept this myth alive, sentimentally known as “The Lost Cause,” the filmmaker tells a story that’s both stunningly comic and utterly tragic. Hunt’s skillful questioning and editing techniques effectively blow the lid off the ignorance, cynicism and hypocrisy of those who still believe in the virtues of losers of the Civil War and how their public symbols, such as the statues in question, perpetuate the values of a system that treated fellow humans as property and inferior beings. As the premiere episode of the upcoming season of the PBS series “POV,” this excellent offering is a fine choice, both as a work of filmmaking and as an enlightening and educational vehicle that every American should see.