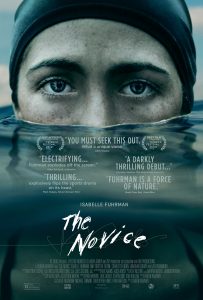 Writer-director Lauren Hadaway’s debut feature is the kind of picture that I describe as “Look Ma, No Hands” filmmaking, a movie in which a wide array of photographic, narrative and atmospheric elements are all haphazardly thrown together to showcase the creator’s range but ending up with a finished product that’s scattered, unfocused and largely incoherent. This cryptic tale of a perfectionist student athlete spends its first half endlessly depicting this overblown character trait but offering precious little in terms of motivation or back story. This makes for a mystifying, tiresome and boring exercise that tries to prop itself up with gimmicky editing and an exhausting yet unsatisfying narrative. The film attempts to compensate for this in its back half by finally filling in some of the missing pieces, but, by that point, given the prior lack of engagement, it’s difficult to muster much interest or enthusiasm for what’s playing out on screen. To its credit, the picture does feature some inventive cinematography, but that’s window dressing that’s undercut by all of the foregoing issues, not to mention a fundamentally odd idiom for exploring its central subject matter and an eclectic soundtrack that often feels weirdly out of place. I really have to wonder what the director was aiming for here, but most of it doesn’t add up, leaving viewers with more muddle than riddle. Yet more proof of what an awful movie year 2021 was.