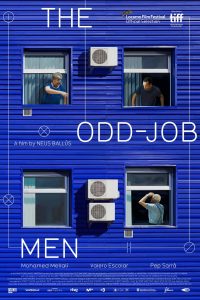 Though billed as a comedy, one would be hard-pressed to think so given the finished product. Despite a well-crafted production design and a simple but potentially engaging premise of this Spanish offering – that of a week in the transitioning lives of three handymen who work for a small maintenance and repair company in suburban Barcelona – the film never gels into what it could have been, resulting in a largely uninteresting, insubstantial snooze where viewers are left waiting for punchlines that never materialize. It’s not that the characters aren’t well drawn; they’re just not given much to do, and almost none of it generates the laughs one expects from its billing. Director Neus Ballús’s latest plays like the first draft of a script in need of serious shoring up, despite originating in what could have been a rich vein of worthy material if suitably developed. Instead, viewers are left with a picture where it feels like the filmmaker could have done so much more with it but didn’t.