Skip to content
Home/‘The One and Only Dick Gregory’

‘The One and Only Dick Gregory’ 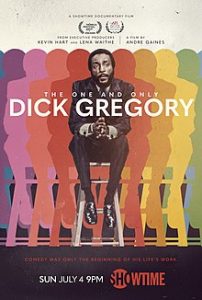 “The One and Only Dick Gregory”

Comedian/activist/health advocate Dick Gregory lived quite an amazing life, as depicted in this new biographical documentary. With a wealth of archive footage of Gregory’s standup performances, his civil rights activism and his efforts to promote healthier living, backed by an array of interviews with those who knew him and performers whom he inspired, director Andre Gaines’s debut feature presents a detailed look at this prescient icon’s storied life. In addition to appearances by Gregory’s wife, children, publicist and biographer, the film also includes insightful conversations with actor/comedians Chris Rock, Dave Chappelle, Kevin Hart, Wanda Sykes, Rob Schneider, Nick Cannon and Harry Belafonte. While the picture provides a thorough treatment of Gregory’s activism, it nevertheless could have placed more emphasis on his comedy, given that the clout he built up through his success as an entertainer was what made his later, more meaningful work possible. That aside, however, this excellent offering provides viewers with a fitting tribute to a remarkable talent and an impressive human being who brought true meaning to the word – and practice – of integrity. The film premieres on the Showtime cable TV network on July 4.