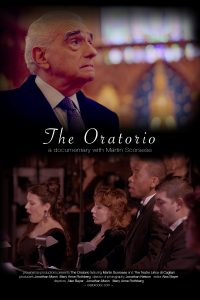 It’s amazing what a little culture can do. So it was in 1826 New York, when the first American performance of Italian-style operatic music was staged in the city’s Old St. Patrick’s Cathedral, an oratorio arranged by Lorenzo da Ponte, Mozart’s librettist. This little-known event sparked a wave that impacted Gotham’s arts scene across the board, helping to make the city the center of American cultural life. In “The Oratorio,” directors Alex Bayer, Jonathan Mann and Mary Anne Rothberg document a present-day re-creation of that event, with commentary from the likes of Martin Scorsese and Jim Gaffigan, who call the cathedral their home parish. In addition to chronicling the current re-creation by the company of Italy’s Teatro Lirico Cagliari, the film details the original event, the life of its creator and the history of the cathedral, including its ongoing impact as a spiritual center for New York’s immigrant population. While this offering commendably presents material on a wide variety of subjects, its focus sometimes meanders a bit, and it could definitely benefit from more of what this picture is all about – the music. Nevertheless, “The Oratorio” is an otherwise-engaging and enlightening project that sheds light on a story whose influence has been far greater than its principals probably ever imagined – and deserves to be remembered and celebrated.