‘The Personal History of David Copperfield’ 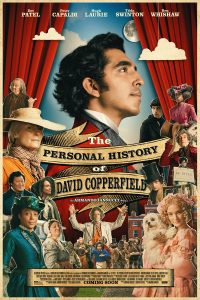 “The Personal History of David Copperfield”

Putting a fresh face on a classic is always a risky proposition, especially with a mob of purists on the sidelines ready to pounce on even the slightest transgression. However, director Armando Iannucci’s latest effort takes a valiant stab at doing that with Charles Dickens’s semi-autobiographical novel and mostly comes up a success. Note, though, that I said mostly. While the narrative deviates somewhat from its source material and condenses the overall story from its original voluminous length, this largely lighthearted take on the novel is whimsically entertaining, even if that whimsy sometimes goes over the top and becomes annoying as a result of its own self-congratulatory cleverness. Viewer engagement with the characters could have been bolstered as well, though this is compensated for by the excellent ensemble cast, particularly the fine performances of Dev Patel (his best work), Tilda Swinton, Hugh Laurie, Peter Capaldi and Ben Whishaw. The multiracial cast might strike some audience members as a bit odd at first given the story’s Victorian English setting (think Hamilton meets Dickens), but that “distraction” tends to dissipate as the film moves along, especially since the film itself tends to get stronger the further it moves along. While this reworking of a classic may not succeed on every front, it’s certainly novel enough to provide a lazy afternoon’s entertainment and a nice escape from the everyday world.