‘The Phantom of the Open’ 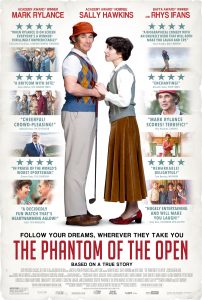 “The Phantom of the Open”

When it comes to those who’ve achieved celebrity cult status for their magnificent failures, the names of filmmaker Ed Wood and British ski jumper Eddie the Eagle readily come to mind. And now, thanks to director Craig Roberts’s hilarious new fact-based comedy, we can add golfer Maurice Flitcroft to that list. This story of how a middle-aged crane operator in an English shipyard stumbled his way into competing in the 1976 prestigious British Open Golf Tournament as a rank amateur epitomizes the notion of “Never say die.” His record-breaking performance for the highest score ever attained in a qualifying round for the competition earned him a brand of off-hand notoriety that catapulted him to the top of the sports pages at the time and made him a surprise living legend. And, through it all, he managed to hold on to his soft-spoken, unassuming attitude, maintaining always that it’s better to try and fail than to never try at all. This sweet, charming, whimsically funny tale delights from start to finish, especially in the picture’s second half, in large part thanks to the fine performances of protagonist Mark Rylance and Sally Hawkins as Flitcroft’s loving spouse. What’s more, there’s no need to worry about a lack of knowledge about golf, as this is more of a story about a determined underdog who just happens to be a golfer than one requiring an intimate familiarity with the particulars of the sport. Admittedly, this offering could be a little better paced in the opening hour, the overdone soundtrack could stand to be toned down somewhat, and several fantasy sequences and transition bridges could have been handled more effectively, but those are small criticisms in light of everything else that the picture gets right. Indeed, how refreshing it is for this year’s summer movie season to finally produce something truly worth seeing! So tee up and give this one a shot – you won’t regret it.