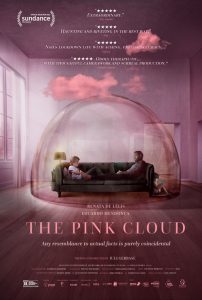 Written in 2017 and filmed in 2019, filmmaker Iuli Gerbase’s debut feature exhibits a remarkable prescience about the events that came to dominate global culture over the next two years. This story about the unexpected appearance of pink clouds that contain toxic gases and kill quickly after exposure follows the experiences of a young couple who just met but are hurriedly forced indoors into joint isolation to stay alive. Their years-long time together leads to an on-again/off-again relationship while they each attempt to deal with issues related to survival, depression, a lack of interpersonal connection and all of the other matters that have ironically become all too familiar to many of us in recent years. But, beyond the uncanny parallels to real life, this Brazilian offering also explores a host of other philosophical and moral issues, such as acceptance of our circumstances, knowing when to let go and developing appreciation for what we have, even in the absence of what we’ve lost. Admittedly, the film suffers from occasional pacing issues (especially in the second half), as well as repetitiveness in some aspects of the screenplay/narrative. Nevertheless, this release has much to say, not only about what we’ve experienced, but also in terms of what we should consider taking away from it.