‘The Power of the Dog’ 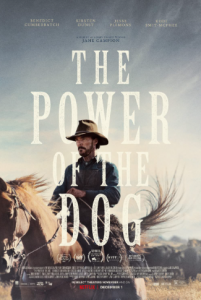 “The Power of the Dog”

Cinematic artistry is indeed inspiring, but, if a film doesn’t have a comparably impressive narrative, that celluloid mastery generally all goes for naught. Such is the case with writer-director Jane Campion’s latest, a disappointingly underwhelming effort from an ordinarily reliable auteur. The chief problem here is an often-thin, sometimes-obvious, frequently unfocused story (with a script to match), one that’s principally an essay on the dangers of toxic masculinity as explored through life on a 1920s Montana cattle ranch. The film seeks to examine this issue through a variety of story threads, most of which are far from fully developed and lack coherent correlation save for the behavior of a somewhat clichéd, mostly monodimensional protagonist. To its credit, “The Power of the Dog” features gorgeous cinematography, strong character development, a fine period piece production design, a captivating original score, and excellent performances, especially from Benedict Cumberbatch and Kodi Smit-McPhee. Yet, even though these strengths come close in capably covering the material’s inherent weaknesses, they’re not enough to elevate the film to the level of greatness or to live up to much of the undeserved hype many critics have heaped upon it.