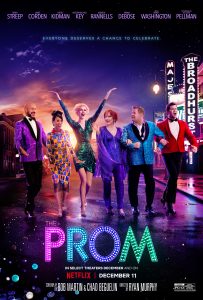 While I must freely confess to not being a fan of movie musicals, I must admit that I came away somewhat pleasantly surprised from this tale of a group of self-absorbed Broadway stars stepping in to help a small town Indiana lesbian attend her high school’s rigidly regimented heterosexual-only prom. The film’s colorful and distinctive production design, clever editing, dazzling choreography, and surprisingly memorable score for a contemporary musical are all unexpectedly impressive, told through a story that combines elements of “The Music Man” (1962), “Footloose” (1984) and any number of gay acceptance stories, as well as heavy influences from the teen musical TV series Glee (2009-2015). However, that’s not to say this overlong offering is without its share of problems, including sledgehammer moralizing (despite a noteworthy message) and bombastically hammy performances that surpass the inherent exaggeration typically required of cast members in movie musicals (especially those turned in by James Corden, Kerry Washington and the usually-reliable Meryl Streep). Whatever creative equity the film manages to build up in its technical attributes is, unfortunately, undermined by these cloyingly overbearing shortfalls, keeping director Ryan Murphy’s latest from living up to the potential it might have otherwise achieved (and, trust me, that’s being kind from someone who seldom has much of anything praiseworthy to say about the movies of this genre). This largely inconsequential serving of cinematic fluff may work fine as modestly entertaining escapist fare, but, as a vehicle for championing a progressive social cause, the message comes across far too heavy-handedly as it seeks to surface from the depths of a suffocating ocean of celluloid glitter.