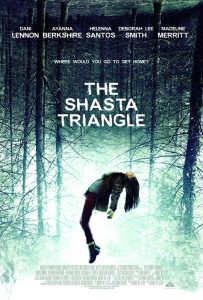 The area surrounding California’s fabled Mt. Shasta is famous for its bizarre mystical and paranormal activities, but none of them are likely as unfathomable as those depicted in this stylish but exceedingly muddled sci-fi offering. Writer-director Barry W. Levy’s second feature may offer some intriguing visual appeal, but its scattershot narrative feels like it was made up as the filmmaker went along. This story of five rancorous old high school chums searching for the lost father of one of them comes across like a fusion of a poorly written “X-Files” episode and a catty wilderness outing with the “90210” cast. The narrative meanders aimlessly, never gaining any meaningful, insightful or especially interesting traction. And, by the time the picture enters the home stretch, viewers are likely to care less about how it will all shake out. It’s too bad when a film has strong production values going for it but fails to have the strength of a commensurate story line, as is very much the case here.