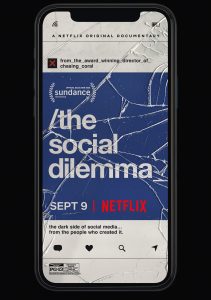 Though the cautionary tales here are noteworthy (especially for the younger and more impressionable users of social media), “The Social Dilemma” tends to sideline such personal attributes as choice and free will in presenting its arguments, as if we’re all too weak-willed to make decisions for ourselves. As a result, the absolutist nature of its contentions weakens their impact, suggesting that our behavior is unavoidably alterable and that we’re all ill-equipped to handle the compellingly manipulative forces of technology and an intrusive business model relentlessly driven by profits at all costs that are mercilessly thrust upon us. What’s more, the film under-emphasizes the human factor in the creation of these issues, generally putting the blame more on the technology that drives them than the individuals who initiated them, as well as on those (i.e., virtually all of us) who obviously lack the personal power to drag themselves away from these destructive influences. Through interviews with former social media and information technology experts, backed by fictionalized examples illustrating their assertions, director Jeff Orlowski’s documentary makes some valid points that we should all be aware of, but its dogmatic approach – despite the inclusion of some tangible and scary real world incidents – effectively removes us from the equation in being able to do anything about it. A handful of solutions is offered to address this social dilemma, and fleeting references to the benefits this technology has afforded are given passing acknowledgment, but the prevailing outlook is one that we’re all doomed by our inherent ignorance and an inability to protect ourselves from an impending horror. Personally, I refuse to give up that easily, and I’m troubled by a film that suggests resistance is futile. Responsibility is key, something this offering makes little allowance for.