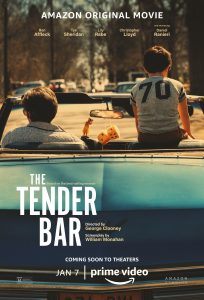 Were it not for its fine period piece production values, its bouncy nostalgic soundtrack and a surprisingly good supporting performance by Ben Affleck, this coming of age memoir offers virtually nothing else engaging, noteworthy or memorable. This latest release from director George Clooney – who really needs to spend more time in front of the camera than behind it – tells the stunningly dull tale of an aspiring young writer who grows up in a largely dysfunctional Long Island family in the 1970s and ’80s. Unfortunately, the film’s cliché-ridden narrative is all over the map and wholly generic, presenting a collection of story threads that feels as if it’s been selectively culled and sloppily stitched together from any number of other releases in this genre. What’s more, a number of story elements and characters are introduced and subsequently dropped, leaving viewers hanging about what happened to them, while others are mercilessly revisited, prompting viewers to plead that the picture get on with itself. Affleck’s portrayal helps to keep the pace moving and modestly interesting at times, but, if it weren’t for that, this would otherwise be a painfully tedious watch – something it’s already not too far from. Growing up is generally more captivating than this, and a film about that process certainly should be as well.