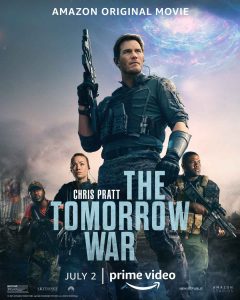 As big budget dopey summer blockbusters go, this has got to be one of the most laughably ridiculous offerings I’ve ever seen in this genre. The plot of director Chris McKay’s overlong saga of a man vs. alien war fought across time is riddled with more holes than a gun range target. Even the special effects, which should be the biggest asset in a production like this, leave much to be desired, frequently going on far too long and bringing new meaning to the term “silly.” Had the movie more earnestly embraced the campiness factor on which it so often borders (a la “Starship Troopers” (1997)), this probably would have been a much better picture, not to mention a lot more fun. To its credit, the film’s closing sequence helps to make up for much of what preceded it, but, by then, it’s too little too late. And, as for the performances, all I can say is that cast members like Chris Pratt and J.K. Simmons really must have needed the money to become associated with a project as awful as this. Thankfully, the credits eventually do roll, but not until one has surrendered 2:20 that will never be retrieved.