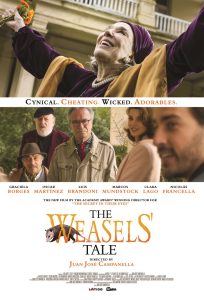 When two millennial con artists take on four movie industry veterans past their prime, the plot thickens as everyone tries to outhustle one another. It doesn’t matter that the once-famous cinema idols are essentially financially destitute and live on a decrepit estate that’s falling apart and overrun by the local wildlife – everybody’s still out to look after himself or herself first. This deliciously devious dark comedy is filled with devilish twists and turns, nicely seasoned with snappy writing, creative photographic effects, superbly campy performances, a spot-on soundtrack and a story line where art imitates life (and vice versa). Director Juan José Campanella’s latest sizzles throughout, nicely paced and crisp in virtually every frame, including those that slyly poke fun at the movie industry through the picture’s narrative. A hilarious morality play that’s a genuine joy from start to finish.