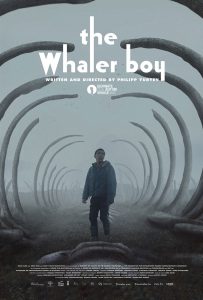 Coming of age is a universal human process that virtually everyone goes through, no matter where they live and under what conditions. So it is for Lyoshka, a 15-year-old who lives with his grandfather in a whale hunting village in the Chukotka region of eastern Siberia along the shores of the Bering Strait. Like many of the men in his community, which has a pronounced dearth of women, he’s a red-blooded sex-starved male whose only contact with the opposite sex is through the performers on erotic video chat sites. And, like many young men in his peer group, he’s captivated with what he sees as his hormones flourish. He’s particularly smitten with a woman who goes by the screen name HollySweet999, a flirtatious blonde with whom he naïvely believes he’s made a genuine connection – and is determined to meet by somehow crossing the narrow nearby strait and making his way to her in, of all places, Detroit. In bringing this story to life, writer-director Phillip Yuryev’s debut feature skillfully blends aspects of multiple genres and narrative formats, including elements of road trip tales, cross-cultural stories and personal transformations, along with adventures in sexual awakening, loss of innocence and rediscovered gratitude. The picture’s expertly penned script captures and conveys a variety of moods, from refreshingly whimsical to delightfully humorous to deadly serious and even deftly surreal, making for a viewing experience that’s always engaging, never dull and generally free of flotsam. In tandem with this, though, sensitive viewers should be aware that the director rarely holds anything back, including rather explicit depictions of sexuality and graphic footage of an actual whale hunt, story elements that some might find offensive or disturbing. There is also a slight tendency for the story to drag a bit toward the end. These matters aside, however, “The Whaler Boy” is an inventive take on a formula format that could easily have become trite, clichéd and melodramatic if left in lesser skilled hands, and, thankfully, that’s not the case here. This enjoyable little-known gem is well worth the time.