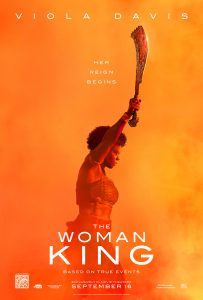 Where do I begin with this one: Simply put, director Gina Prince-Bythewood’s latest offering is a wholesale mess in so many regards that I couldn’t wait for this overlong slog to end. In the course of frequently checking my watch, I was subjected to 2+ hours of sloppy writing attempting to cover historical fuzziness, despite the film’s contention that it’s a historic epic set in an alternate historical timeline (which is kind of like claiming that someone is almost a virgin or just a little pregnant). On top of this, the endless saga is peppered with too many extraneous subplots that detract from the protagonist’s narrative, silly story elements that don’t make sense, far too many repetitive war dances, corny dialogue, frequently gratuitous and credibility-stretching fight sequences, and a disappointing performance by Viola Davis who tries to come off as a badass African-American female version of John Wick. The finished product thus ends up playing like a project put together by a committee of producers. To its credit, the picture includes historical material that some might find uncomfortable, a few noteworthy and heartfelt scenes in the home stretch run, and modestly entertaining touches of comic relief, but that’s small compensation for everything else this one gets wrong. I’m sure politically correct viewers will eat this one up, especially when it comes to addressing matters of female empowerment, but I also can’t help but wonder how any enlightened woman would look at this and say that the secret to being a better individual is to act more like male macho schmucks. Because of all this, I’m truly at a loss to understand what so many critics see in this release. Even as a pure entertainment vehicle, it just doesn’t measure up compared to many of the other action-adventure offerings out there. Wait till this one comes to streaming – and only then if you have nothing better to do.