‘The World to Come’ 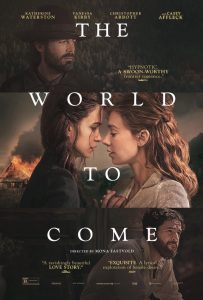 “The World to Come”

No matter how beautifully filmed, poetically (though unnaturally) written and superbly performed this period piece forbidden romance may be, one can’t escape the fact that it is one big, uneventful snooze, especially in the first half. While viewers wait for almost an hour for a plot to develop, in the interim they’re subjected to endless (and often irrelevant) diary entry voiceovers and dialogue exchanges punctuated by words that come straight out of crossword puzzle clues. Director Mona Fastvold’s second feature genuinely aspires to something grand, but it gets bogged down in a sea of pretention, triteness and politely camouflaged outrage, not to mention a lack of chemistry between the film’s two female leads. It’s unfortunate that the superb cast and fine production values are wasted on a vehicle that has been the subject of many a film over the years, despite its somewhat novel time frame. And, even though this offering tends to redeem itself in the final act, it’s not enough to have to endure what precedes it. Catch a nap beforehand – or during the opening half (you won’t miss much).