‘The Worst Person in the World’ (‘Verdens verste menneske’) 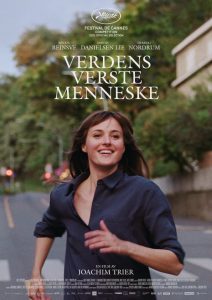 “The Worst Person in the World” (“Verdens verste menneske”)

When we don’t know what we want out of life, we may appear to others as fickle, capricious or self-centered, especially if we’re not afraid to admit to such uncertainty. And that, needless to say, doesn’t always bode well for our reputation with others. But is this kind of acknowledged indecisiveness truly a character failing, perhaps even a symptom of unacknowledged narcissism? That’s what the protagonist of this insightful, superbly written Norwegian comedy/drama/character study is up against, a scenario in which the film’s principal could easily be characterized as the embodiment of the picture’s title. However, as this offering also shows, it’s possible to say that there just might be a little of the worst person in the world in all of us, an observation that should give us pause to consider how we not only see others but also ourselves. Writer-director Joachim Trier’s latest thus illustrates how the journey of self-discovery is not an easy one, a process that we should be careful to judge, especially when we realize that the bottom line in this is something to which we might all fall prey, mainly because we’re all ultimately only human. The sparklingly crisp screenplay, expertly blended palette of filming styles and stunning lead performance of Renate Reinsve (winner of the best actress award at this year’s Cannes Film Festival) combine to make a thoroughly enjoyable and thoughtful movie-going experience not to be missed. While this offering is currently playing primarily on the festival circuit, it definitely deserves a general release, and, should that come to pass, avid cinephiles should make the effort to rush and go see it.