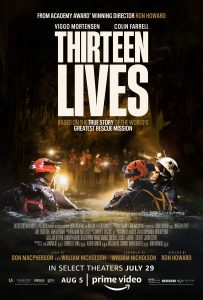 For 18 days in 2018, the world’s attention was focused on the attempted rescue of 12 young soccer players and their coach who were trapped inside the flooded Tham Luang cavern in northern Thailand. It was an inspiring story that moved people around the globe, and director Ron Howard has now brought it to life in a technically masterful re-creation. However, as capably made as this picture is, its overlong 2:29:00 runtime can try the patience of viewers at times, especially when some of it sequences become drawn out and repetitive. This is by no means intended to diminish the uplifting nature of the story or the adeptness with which it has been produced cinematically, but, given the emphasis on the picture’s technical merits, this approach to telling the tale tends to shortchange its tremendous emotional impact.  A journalistically styled by-the-numbers take on telling a story like this is fine, but I was hoping for something a little more heartfelt in light of the miracle this epically heroic yarn turned out to be. “Thirteen Lives” definitely earns a passing grade, but I can’t help but wonder what it might have been with a little more emotion – and a lot more heart-tugging.