‘This is Not Berlin’ 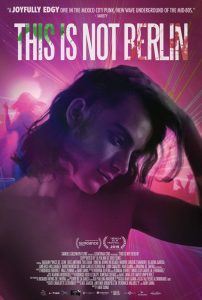 Substance over style may be enough for some moviegoers, but many savvy cinephiles require more, and that’s certainly the case with this thrown-together collection of images and incidents that have little meaningful cohesion to bind them. Set in Mexico City in 1986, this slow-moving slog tells the stories of three high school students who become involved with an assortment of metrosexual, drug-addicted sociopolitical performance artists and musicians who endlessly go clubbing to party at fringe and edgy night spots. However, in several cases, it’s difficult to fathom the characters’ interest in this scene given how divergent it is from their backgrounds (not to mention their subsequent radical changes in behavior and the events that spring forth from this inexplicable shift). What’s more, the film attempts to provide a temporal context by including references to events of the time, though without elaboration of and explanation for their inclusion in the first place. Despite the picture’s relative success at capturing the look and feel of the era, some of it is painfully excessive, most notably the performance art, which is pretentious even by 1980s standards. Director Hari Sama’s half-baked effort leaves much to be desired, no matter how stylish it may appear on screen or how allegedly hip it may think it is.