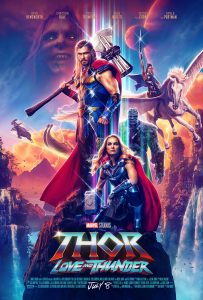 In an age when many of the films in the Marvel Universe are becoming predictable and cookie-cutter in nature, it’s refreshing to see one of its franchises pulling away from the pack and distinguishing itself as something fresh and different. Following up on its charming breakout predecessor, “Thor: Ragnarok” (2017), this latest installment in this series of action-adventure offerings further defines and delineates its character, presenting a work that’s whimsical, funny, touching and delightfully silly without being stupid. Much of the thanks for that goes to writer-director Taika Waititi, who has successfully crafted an identity for this franchise that’s distinctively all its own, one that incorporates elements different from its cinematic cousins, doesn’t rely exclusively on action sequences to be entertaining, isn’t needlessly overlong and doesn’t take itself so damned seriously. It truly establishes Thor as the rock star of the superhero universe, setting the God of Thunder apart from his many stoic, bland, uber-noble counterparts. The picture’s impressive all-star cast (including an array of hilarious uncredited cameo appearances) provides an excellent vehicle for actors to show off comedic talents that they don’t often display in other works. And the primary rom-com storyline will pull at the heartstrings while simultaneously providing more than its fair share of laughs. A few sequences stretch on a tad too long, but there are so few of them that it’s hard to notice. While this may not be the “Thor” or Marvel movie that many hard-core diehard fans are expecting, that doesn’t matter. Like the “Deadpool” movies, it serves up something that breaks the tedium of a genre that has been growing progressively stale and tiresome, and any film that does that is certainly OK in my book. This is without a doubt the class of the summertime action-adventure releases to come out thus far.