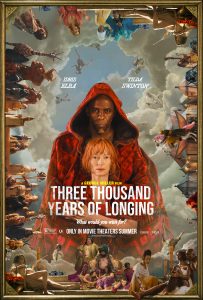 It’s truly astounding how a film dealing with magical, mystical subject matter can turn out to be as boring and unfocused as this offering is. However, that’s exactly what’s happened with renowned director George Miller’s latest, a meandering, talky, tedious tale about an aging single reclusive narratologist who has an unexpected encounter with a djinn while she’s attending a literary conference in Istanbul. Having liberated the magical being from a long incarceration in a bottle, he promises to grant her three wishes, something she’s reluctant to do, given her profound familiarity with the cautionary tale nature of such scenarios. As a result, much of the film ends up centering on the djinn’s recounting of stories from his life while his liberating benefactor questions him about what those experiences have meant to him. The process consequently plays like a Barbara Walters Special only far less interesting. While there are modest attempts at probing more in-depth subject matter, such as the significance of story and what it means in shaping and characterizing the nature of our existence (a la the observation of poet Muriel Rukeyser who noted that the universe is made up of stories, not of atoms), these notions are left largely underdeveloped, becoming lost in an ongoing parade of tales spun by someone who comes across like a magical male counterpart of Scheherazade. To its credit, the picture serves up some interesting special effects, a small helping of humorous bits, and fine lead performances by Idris Elba and Tilda Swinton, though their talents are largely squandered here as they attempt to salvage material seriously in need of being significantly retooled and substantially rewritten. It’s a major disappointment given the parties involved in this work, one that makes it easy to see why this offering was relegated to a late summer season release.