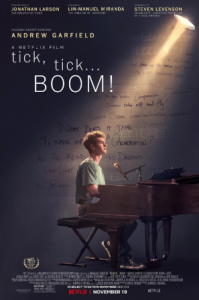 Based on the Jonathan Larson musical by the same name, director Lin-Manuel Miranda’s debut feature tends to frustrate more than it entertains. With an almost totally absent back story about the play, the production’s semi-autobiographical protagonist and most of the key figures in his life (both on stage and in real life), viewers who aren’t already familiar with the source material come in at a distinct disadvantage. Is this supposed to be a cinematic translation of the stage production? A film biography of the musical’s composer? Some combination of the two? That, in itself, is never made especially clear, leaving audiences wondering exactly what the picture is trying to be. And, when the narrative veers off in an array of different, often-unexplained directions, the story wanders aimlessly, focusing more on attempting to create a series of “memorable” musical numbers, an elusive feat given how eminently forgettable and pretentious most of the compositions truly are. The screenplay’s repeated treatment of such recurring themes as “the pain of the tortured artist” and “the anguish of time escaping us” grows progressively tiresome after multiple iterations, leaving viewers anxious to see the picture get on with the story. To the film’s credit, it features fine performances by Andrew Garfield, Alexandra Shipp and Judith Light, all of whom valiantly attempt to make the most of what they have to work with; it’s just a shame that they didn’t have a better script at their disposal. In the end, for those who are ardent fans of Broadway musicals and the work of Jonathan Larson, this reverential tribute might make for worthwhile viewing, but, for the casual movie fan, this one leaves much to be desired.