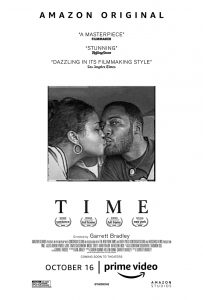 Is it a statement about the cruelty and indignities of the prison system? A love story of spouses separated by a jail sentence? A family’s struggle for survival with an absent father? Well, it’s some of all of these things, but the finished product fails to come together coherently into a cohesive whole. It’s pointed, outspoken criticism is limited to a few noteworthy passionate outbursts, one of the picture’s genuine strengths. It’s up-close portrait of a family burdened is well-intentioned but weighed down by an excess of archival home movies and a jumbled mix of contemporary footage presented with little explanation, back story or context. And, in between, the sequences are linked by segments consisting of beautiful but pointless art house cinematography and long, lingering emotive shots, neither of which adds much other than presenting images that are pleasing to the eye. Director Garrett Bradley’s latest has garnered considerable praise, as well as an Oscar nomination for best documentary feature, but, unfortunately, whatever the driving intention is here, it doesnt come through as clearly as it might have. Better editing and a sharper focus would have helped immensely, taking what assets the film does have and making them resonate more viscerally with the viewing audience.