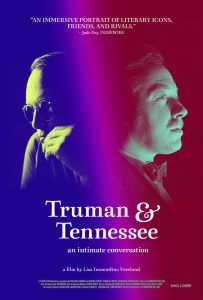 Bringing together the insights and words of two legendary writers in one film is an intriguing approach to the biographical documentary genre, an approach employed cleverly and skillfully in this offering from director Lisa Immordino Vreeland. By combining archive interview footage of the two literary icons with voiceover narrations of their writings read by Jim Parsons and Zachary Quinto, viewers see a picture emerge not only of these two gifted artists, but also the parallels between their respective backgrounds, the nature of their longstanding friendship and the ways in which their personal lives influenced their work. These discussions are supplemented by numerous clips from film and television adaptations of their novels and plays, including “A Streetcar Named Desire,” “Cat on a Hot Tin Roof,” “Baby Doll,” “Night of the Iguana,” “The Glass Menagerie,” “Breakfast at Tiffany’s” and “In Cold Blood,” to name a few. While this release is not always especially revelatory about either of these well-known individuals, it’s nevertheless quite intimate and authentic in their on-screen depiction, especially in the archive interviews conducted by David Frost, Dick Cavett and Tom Brokaw. If nothing else, this film puts an interesting spin on its material and brings its protagonists back to life, even if only for a little while.