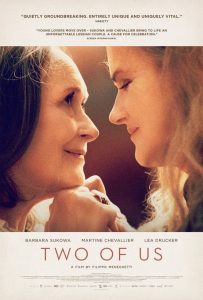 How and who we love has undergone tremendously liberating changes in recent years, but, for some seniors, who remember a time when such taboos could not be revealed, the past painfully lingers on into the present. So it is for an aging French woman who is unable to bring herself to tell her adult children about her lesbian partner, leaving her longtime lover on the sidelines when a tragic event disrupts their happiness and lives together. Director Filippo Meneghetti’s debut narrative feature is an intensely gripping and moving work, one that grabs viewers by the collar and makes the frustration experienced by its protagonists truly palpable – and infuriating. The superb performances by Barbara Sukowa and Martine Chevallier are riveting and heartfelt, achieving powerful impact with gestures as simple as facial expressions and piercing views into their eyes. There are a few incidents in the narrative that seem a bit far-fetched, but they’re compensated for by everything else this release has to offer, already a multiple awards season nominee and a shortlist contender for best international film at the Oscars. The pain and warmth of this one must be experienced by anyone with a conscience – or a pulse – to see that, no matter how far we have come, there’s always more ground still to be made up.