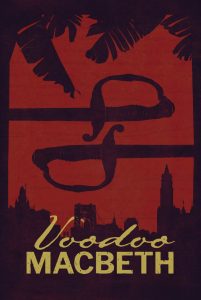 When the Roosevelt Administration launched the Federal Theatre Project in 1935 as part of the government-sponsored New Deal program, that initiative included a Negro Unit specifically aimed at developing African-American theatrical productions. One of that unit’s most auspicious undertakings was the staging of an all-Black cast adaptation of Shakespeare’s Macbeth, set in Haiti instead of Scotland. To get this version of the play into production, unit heads Rose McClendon and John Houseman hired a 20-year-old neophyte director named Orson Welles to bring it to life. Welles had a bold vision for this Harlem-based production, but he encountered endless challenges in making it happen, including multiple casting issues, funding obstacles initiated by a Congressman who claimed the play was “Communist propaganda” and the director’s own obsessive, self-destructive behavior. Nevertheless, the cast and crew soldiered on, despite these obstacles, to put their own spin on this classic tale. This docudrama, a project of the USC School of Cinematic Arts, was written by a team of eight students and shot by a crew of 10 top graduate students, a collaboration that has resulted in a fine finished product. Some of the writing is a bit over the top at times, and some of the acting is admittedly rather hammy (and not in the Shakespearean sequences, where it would most likely be expected), but the casting overall is quite solid, as are the period piece production values. It’s gratifying to see a student project turn out as polished as this one has, making it a film that deservedly warrants a general release to reach a wider audience.