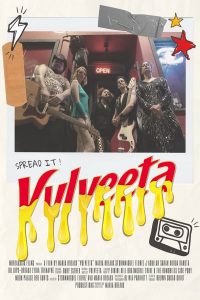 As she approaches her 50th birthday, former riot grrrl punk band front woman Grrrilda Beausoleil (Maria Breaux) decides to celebrate by organizing a reunion of the disbanded group after a 20-year hiatus, all of which is to be chronicled by a documentary film crew. However, as enthusiastic as she might be about this project, not all of Grrrilda’s former band mates are on board when it comes to realizing her particular vision for the venture. Things have changed in the Bay Area arts and music scene in that time, not to mention in the lives of the musicians and in their relationships with their onetime lead vocalist. Circumstances have changed so much, in fact, that the comeback may never get off the ground before it even starts. Such are the challenges faced in writer-director Maria Breaux’s completely improvised mockumentary, a comedy with ample potential that, unfortunately, could have benefitted from some additional development and refinement before filming began. While many sequences are genuinely hilarious, others go on too long and/or fail to stick the landings. That’s too bad, especially since the premise here is solid, one that could have provided a platform for truly outrageous humor. Regrettably, the bits that don’t work are overly stretched out, fall flat or are simply too tame given the underlying subject matter. What’s more, the LGBTQ+ aspects of the story and the documentary nature of the storytelling approach are often underdeveloped, in both cases representing failures to tap into rich veins of material that could have (and should have) played more important roles in the overall narrative. To its credit, though, when it works, it works, especially in the inspired musical numbers and the camera work, such as a performance sequence that plays like an homage to the B-52s’ Love Shack music video. “Vulvetta” is by no means an awful film, but it’s one that, with a little more fine-tuning, could have been a lot better – and a great way for Grrrilda to celebrate her birthday.