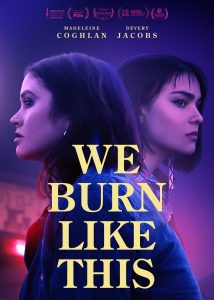 The issues of anti-semitism and Neo-Nazism, regrettably. are still alive and well, and they even show their faces in some unlikely locations, such as Montana’s Big Sky Country. Director Alana Waksman’s debut feature deals with this very subject and from a perspective based on actual incidents. The film follows the story of a young Jewish woman living in Billings whose grandparents survived the Holocaust. However, much to her dismay, she’s being targeted for harassment by hate groups, sending her into a downward spiral of depression and substance abuse. She finds herself living the religious persecution of her forbears, and she’s not entirely sure what to do about it. After a hospital stay for an overdose and an ongoing inability to resolve her circumstances, she pays a visit to her mother in Butte, where she learns of and recalls other painful memories from her past, forcing her to either take control of her life or be consumed by it. Unfortunately, the film has trouble pulling all of this together to make for a coherent and compelling picture. The narrative often feels scattered, jumping around at random and skimping in terms of back story along the way. It’s too bad, given that it seems like there’s a good movie in there somewhere; it just never seems to surface.