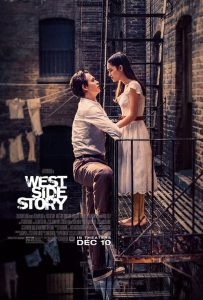 Ever since I saw the delightfully campy opening musical sequence of “Indiana Jones and the Temple of Doom” (1984), I’ve always wanted to see Steven Spielberg direct a full-length feature movie musical (even though it’s far from my favorite film genre). And, in the case of his remake of this beloved movie classic, he does quite a commendable job overall, yielding an offering that I enjoyed far more than I expected I would, even at its protracted, though surprisingly well-paced, two-and-a-half-hour runtime. While some have questioned the filmmaker’s decision to attempt a reboot of a cinematic icon like this (a decidedly risky venture in the movie biz), I believe it ultimately proved to be a wise choice, despite its tepid box office performance. Its stylish re-creation of something familiar with music that’s actually memorable (unlike that found in most other contemporary movie musicals) automatically earns this production more than a few gold stars. The same can be said for the positively superb choreography, the excellent renditions of the time-tested musical numbers, the solid supporting portrayals of ensemble members like Ariana DeBose and the casting of returning veteran Rita Moreno in a fine supporting role. Despite these many strengths, however, the picture still feels like it’s lacking an engaging emotional undercurrent beneath its high-gloss surface trappings. It also could have used a better casting choice than Ansel Elgort in the male lead. And the film’s attempt at bringing the story in line with current political correctness in some of its screenplay and production decisions (like no subtitles for much of the dialogue spoken in Spanish – lame!) speaks more to market and cultural pandering than wise filmmaking or bona fide narrative authenticity. Still, this is a film worth seeing for all of the things it gets right – and, coming from me, that says a lot where a musical is concerned.