‘Whether the Weather Is Fine’ (‘Kun Maupay Man It Parahon’) 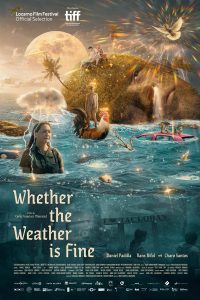 “Whether the Weather Is Fine” (“Kun Maupay Man It Parahon”)

In a landscape strewn with debris, dead bodies, unattended farm animals and packs of out-of-control children, three survivors of 2013’s Philippine Typhoon Haiyan wander what’s left of the streets of the City of Tacloban. Unsure about what to do, where to go and what the future may hold, they look for ways to survive. At the same time, though, they also wonder how something as horrific as this could happen, especially in a nation where devout faith in Christianity permeates the culture. In their wanderings, they find individuals devastated by their circumstances. But they also discover those who firmly believe that the strength of their faith will somehow miraculously sustain them, including through the acts and deeds of selfless others, some of whom seem unlikely candidates for such altruistic behavior. The result is a ponderous journey with elements that fuse gritty realism with wondrous surrealism. Director Carlo Francisco Manatad’s debut narrative feature is to be commended for its inventive perspective on such a troubling subject, one that’s characterized by scenes depicting such images as children gleefully playing in the shadows of unburied corpses. But the upshot of this is that it is possible to have hope in the face of despair, especially when miracles indeed happen. Admittedly the film could use some judicious editing at times, and there are some elements (such as the surprisingly upbeat score) that seem strangely out of place. However, the underlying message here is one that should not be summarily dismissed. After all, without hope, under trying conditions, what else have we got?