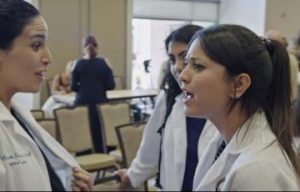 Despite an intriguing premise, director Greg Barker’s latest documentary feature about medical professionals and med students seeking to reform the American health care system is a disappointingly unorganized offering in which its many insightful ideas are presented in a somewhat scattershot fashion, preventing them from being suitably developed as the narrative jumps around from topic to topic. Clearly this is a film that seeks to showcase the passionate efforts of committed idealists in exposing the impact that issues like poverty, racism and an uncontrolled profit motive have had in negatively affecting the quality of care that patients receive, not to mention the exorbitant costs involved as well. However, it seems that just as one of those subjects is being introduced and developed, the thrust of the picture abruptly skips off in another direction, creating a less than coherent storyline. What’s more, due to the documentary’s shooting schedule (which began in 2019), the narrative does something of a left turn with the onset on COVID in 2020, changing the direction even further from how the film began, making for an even greater sense of overall discontinuity. This project is sorely in need of going back to the editing room for retooling to let the ideas raised in this production stand out better so that they receive the unfettered attention that they truly deserve.