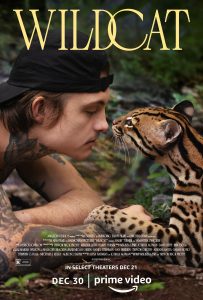 When one is spiraling downward and hopes for the future look dim, it may seem that there’s no coming back from one’s troubles. So it was for Harry Turner, a British soldier who was traumatized by his combat experience in Afghanistan, leaving him with severe cases of depression and PTSD that nearly drove him to suicide. He felt that life was no longer worth living, so he packed up his belongings and headed to the Peruvian rainforest, hoping to lose himself there. However, once in the wilderness, he was taken with the beauty of his new environment, landing a job rescuing orphaned wildlife with conservationist/scientist Samantha Zwicker, who eventually became his partner. Harry became particularly passionate about a program to prepare abandoned ocelots for return to the wild, a project that gave him a purpose and a new reason for living. However, despite the satisfaction it gave him, he still struggled with his mental health demons when the challenges of this effort became too great, nearly causing him and his progress to unravel. This intimate look at a complex, troubled individual, what drives him and what nearly destroyed him tugs at the heart strings in many ways, especially in its ample footage of the positively adorable felines and their intuitive bonds with their human mentor. The picture’s gorgeous cinematography and emotive score add much to this film’s heartwarming narrative, though its length is arguably somewhat excessive given the scope of the subject matter and could have easily benefitted from some judicious editing. Nevertheless, directors Trevor Frost and Melissa Lesh have compiled an uplifting, candid chronicle of this inspiring though sometimes-painful story, one that gives hope where it’s absent and provides even the most downtrodden among us with new reasons to carry on.