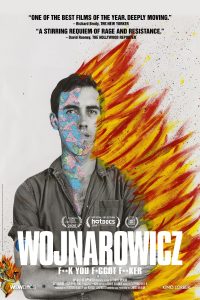 Queer multimedia artist and activist David Wojnarowicz made quite a name for himself in the late 1980s as a fiercely outspoken critic of negligent government policies and practices regarding its indifferent handling of the AIDS crisis, considerations largely driven by unspoken but undeniable prejudicial and homophobic attitudes. Director Chris McKim’s in-depth documentary about the stormy life and colorful career of this controversial artist and in-your-face advocate chronicles his journey from an abusive upbringing to his years as a homeless teenage hustler and eventually as an enigmatic but revered street artist, along with how those often-painful experiences came to characterize the nature of his work. While the film is certainly thorough in its treatment of this material, the picture’s second half is far better than its sometimes sluggishly paced opening act, meticulously covering the time when Wojnarowicz was himself afflicted by AIDS and how he struggled to express his feelings about the disease and society’s response to it. Through a wealth of archival material, including excerpts from the artist’s audio journals, as well as interviews with those who knew him, viewers bear witness to the impassioned rage he felt as reflected through his art and activism. Wojnarowicz may not have attained the same degree of artistic notoriety as contemporaries like Robert Mapplethorpe and Keith Haring during his lifetime, but this film helps to make up for that, while simultaneously shining a bright light on the shameful response of authorities who could have done more but intentionally did not.