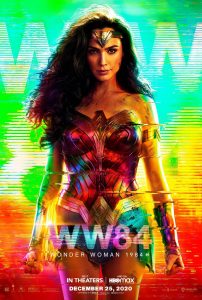 Yikes, what a disappointment! This much-anticipated action adventure release misses the mark in so many ways that it’s easy to lose count. The story is frequently derivative, the script plays like it was written by a committee, the action sequences aren’t especially engaging (and a little slow in coming), there are plot holes aplenty, the symbolism is obvious and heavy-handed, there is little to characterize the story (visually or thematically) as to the significance of its 1984 setting, and on and on and on it goes in endlessly lame ways. To be sure, Kristen Wiig delivers a fine supporting performance as a fence-straddling villain, and there are some nice sentiments worked in during the film’s closing moments. But, compared to this film’s far superior predecessor, director Patty Jenkins’s ambitious but disjointed and flawed offering represents a big step backward for the franchise and its future (especially at a time when it can ill afford it). And, by the way, what’s with that outfit Ms. Wiig wears in the closing sequence? It looks like a wardrobe reject from the movie version of “Cats.”