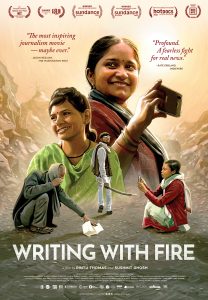 In an age when journalism has become increasingly suspect, unreliable and untrustworthy, it’s comforting to know that there are still committed media organizations out there devoted to reporting with honesty, integrity and a burning desire to uncover the truth. And it’s heartening to note that some of this work is coming from some unlikely sources. Such is the case with Khabar Lahariya, the only newspaper/online news channel in India run entirely by women – and those of the Dalit caste, the so-called often-maligned segment of society crassly known as “the untouchables.” What began as a venture that many believed was destined to fail, the organization has blossomed into a widely followed media outlet, with over 150 million viewers of its YouTube channel. Working from the northern Indian state of Uttar Prahesh, Khabar Lahariya has come to play an influential role in helping to effect meaningful social and cultural change. The staff has tirelessly reported on such topics as victimization against women, illegal mining, mob activity, corrupt and negligent government practices, insufficient infrastructure planning and programs, and the rise of political fundamentalist movements, often helping to spur on much-needed reforms. Directors Sushmit Ghosh and Rintu Thomas have compiled a thorough, up-close look at this group of truth seekers in their Oscar-nominated documentary feature debut, often placing their own lives in jeopardy in following this band of intrepid journalists into dangerous situations where their reporting places them in potentially grave peril. Viewers should be aware, however, that they may experience some sound quality issues in streaming this release, as I did when I watched it (background sounds and the film’s score came through loud and clear, but the dialogue was problematic; thank goodness for subtitles). This glitch aside, however, “Writing with Fire” is exactly what its title says it is – a passionate, inspiring story about a group of truth seekers who have refused to give up at a time when it’s become all too easy for many of us to do so. Good for them – and, ultimately, for us.