Skip to content
Home/‘You Are My Passion’ (‘Eres mi pasión’) 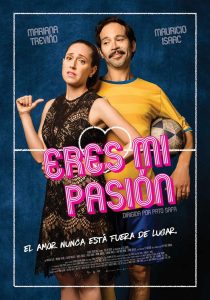 Sports fandom is one thing, but when it becomes an obsession, is it rightly characterized as passion or addiction? That’s what director Anwar Safa’s 2018 Mexican farce explores when a soccer-addicted husband risks losing his wife and family when he carries his rampant enthusiasm for the sport too far, forcing him to seek help if he hopes to hold on to what he’s got. As it turns out, though, he’s not the only one in his household who has an addiction problem, as becomes apparent as the story unfolds. It’s a surprisingly thoughtful story for what is essentially a goofy comedy, one that’s rather formulaic, predictable and decidedly politically incorrect in many ways, but it somehow manages to deliver a fair number of unexpected big laughs. The screenplay is rather thick with Mexican soccer references, the impact of which is likely to be lost on viewers not intimately familiar with the sport, though the gist of their inclusion is nevertheless apparent, keeping their essence from being lost in translation. “You Are My Passion” is hardly an epic, and it’s an easy target for bashing by cynical critics, yet it’s still a fun way to spend a few hours, surpassing what’s typically expected out of fare such as this and serving up a good time in the process.