Skip to content
Home/‘You Resemble Me’ (‘Tu me resembles’)

‘You Resemble Me’ (‘Tu me resembles’) 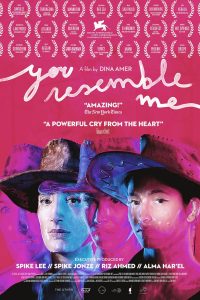 “You Resemble Me” (“Tu me resembles”)

How do we become who we are? Can we attribute it to our upbringing? To society? To politics? Or could it be some combination of all of the foregoing? And, even then, is there a clearly defined answer? That’s the issue addressed in writer-director Dina Amer’s multilayered fact-based debut feature about the life of Hasna Ait Boulahcen (Mouna Soualem), mistakenly thought to be the female suicide bomber who died in the wake of the multiple, coordinated 2015 ISIS-led terrorist attacks in Paris. As the film shows, however, viewers meet a troubled, confused woman who struggled to sort out her life. As a poor Moroccan immigrant living with an irresponsible single mother on the outskirts of Paris, the protagonist led a lonely life, often running away from home with her younger sister and ending up being shuffled from one foster family to another, frequently under the care of culturally insensitive native French guardians. She would later grow up to be a “party girl” who had trouble holding a job and living on her own, eventually becoming smitten with and falling under the influence of her cousin, leader of the Paris attacks, who recruited her into his cause (and her eventual downfall). Through this narrative, the film chronicles the difficulties that Islamic youth often experience in trying to assimilate into European culture, both in terms of being themselves and in fitting in, as well as finding the right balance (if that’s even possible). But is the story presented here convincing enough to show a definitive connection between what happens in childhood and what unfolds as an adult? This film illustrates what may well have happened in Hasna’s case (though some may argue that it’s a gross oversimplification), but is it indicative of her peer group overall? That might represent a sweeping overgeneralization, but the picture nevertheless tells a sad and tragic tale of a woman devastated by her circumstances, one that seeks to set the story straight in light of erroneous reporting that took place at the time of the incident. It does a rather capable job of this, too, though the script admittedly tends to hopscotch around somewhat, especially in its rather drastic time frame jump from Hasna’s childhood to her adulthood. In any event, this production certainly has its share of high-profile backers, with an executive producer team that includes Spike Lee, Spike Jonze and Riz Ahmed, among others. We may never know the full (or true) story of what actually happened to Hasna Ait Boulahcen, but this picture nevertheless illustrates that things may not always be as clear-cut as we believe them to be in cases like this and that, at bottom, we’re still dealing with a scenario involving the lives of people – no matter who they might be or what they represent.