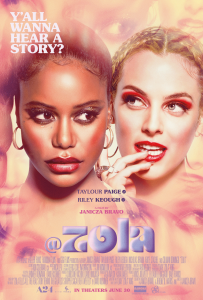 While not everything flows as smoothly as it could in this daffy, edgy, fact-based road trip comedy derived from the contents of a protracted Twitter feed, the parts that do are hilariously ingenious, delivered with punctuated one-liners, snappy writing and inventive, inspired editing. Director Janicza Bravo’s unflinching dive into the depraved world of an exotic dancer who doubles as a sex worker and routinely attempts to rope unwitting colleagues into her world of erotic escapades with a parade of deplorable clients shines a bright light on the unabashedly sleazy side of American culture and the social media/website operations gleefully pandering to those seething desires. The film seldom holds much back, so sensitive viewers should beware of what they might be getting themselves into, but, given the brilliance of the humor associated with such antics, it’s difficult to maintain a prudish façade in the face of the wackiness served up here. To be sure, there are some segments that seem to meander a bit, and it’s not always clear exactly how some events connect, but, considering that the truth is often stranger than fiction, it’s understandable how that might come into play in this offering. The bottom line is that, if you’re up for a polished raunchy romp, this is your film – in all its tawdry glory.