‘Columbus’ gives us space for reflection

Getting away from it all – even under less-than-ideal conditions – can sometimes work wonders, particularly if there’s much weighing us down. But what we do with such opportunities when they present themselves is most important. That’s very much the case for a pair of searching protagonists in the new, thought-provoking drama, “Columbus.”

While on a national lecture tour, a renowned, aging, Korean-born architect collapses, falling into a coma. With no one to attend to his needs, his longtime aide, Eleanor (Parker Posey), springs into action, summoning the ailing icon’s son, Jin (John Cho), to come care for him. Having been estranged from his father for quite some time, Jin is far from enthused about being called upon now, given their unreconciled feelings and the fact that it will seriously impinge upon his job as a book translator. However, considering the expectations thrust upon him to be the dutiful son, he reluctantly makes the journey to join his father. The one saving grace in this, though, is that Jin must travel to a place of beauty and inspiration, the architectural mecca of Columbus, Indiana.

By all rights, Columbus might initially strike outsiders as little more than a nondescript Midwestern town, yet it is much more than what initially meets the eye. Located roughly halfway between Indianapolis and Louisville, Columbus has long been home to an array of innovative structures designed by some of the world’s leading architects, such as Eero Saarinen. And that attribute is what has made this community more than just another easily overlooked stop on the interstate. It also explains the reason behind Jin’s father’s visit.

With his father unresponsive, Jin’s vigil soon turns into an extended visit, one that leaves him with plenty of free time on his hands. One afternoon, while strolling in the gardens of the bed and breakfast where he’s staying, he meets one of the locals, Casey (Haley Lu Richardson), a recent high school graduate who works at the local library. They strike up a conversation and quickly discover that they share somewhat similar circumstances. Just as Jin is caring for his father, Casey is doing the same for her mother, Maria (Michelle Forbes), a recovering meth addict.

Through their times and dialogues together, Jin and Casey address a number of topics of mutual interest, sharing views and serving as sounding boards for one another. And they do so, ironically enough, while touring the local architectural sites, contemplative venues that give them perfect environments for collecting their thoughts. Jin, for example, vents much of the long-simmering resentment he’s been harboring toward his father and the rigid ways of his culture. Casey, meanwhile, quietly expresses the frustration she’s been experiencing in looking after Maria, especially since doing so has caused her to set aside her own dreams of becoming an architect, a talent at which she seems extremely well suited.

As their conversations play out, Jin and Casey have an opportunity to cover a variety of subjects, including life, love, art, healing, forgiveness, personal growth and human relations, to name a few. Their talks give them much to think about, both in terms of where they are and where they wish to go in their lives. The question is, of course, will they heed their own revelations and insights? 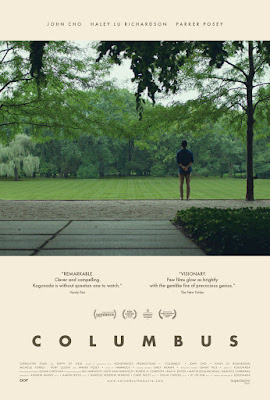 When we take stock of our lives, it often helps to place ourselves in circumstances where we can devote our uninterrupted time and attention to such matters. This is particularly true if we’re dissatisfied with our situations and need to take steps to alter them. That can be difficult to accomplish, however, if our minds are cluttered with the day-to-day flotsam that distracts us. That’s where creating a respite for ourselves can work wonders.

To achieve that, though, we first need to understand how we’ve gotten to where we are and how we can manifest the conditions needed to materialize that much-needed reprieve. This is where the conscious creation process comes into play, the philosophy that maintains we realize the existence we experience through the power of our thoughts, beliefs and intents. And it’s a discipline in which Jin and Casey are about to get a profound and thorough education.

The solitude of a small, quiet Midwestern town characterized by beautiful buildings, dynamic public artworks, elegant parks, magnificent gardens and lush landscapes provides a perfect setting to clear our heads to think things through. That’s especially true when it comes to assessing the beliefs that we’ve been holding onto in creating the reality we’ve been experiencing – and what we might want to do to change the nature of the game as we move forward. An introspective milieu like this thus enables us to implement needed adjustments in various areas of our lives, such as healing ourselves, repairing our relationships and taking steps to live up to our personal potential.

Of course, to make this happen, there must be a willingness on our part to proceed with such tasks, and that, too, depends on our beliefs. If we remain close-minded, we’ll remain prisoners of our own self-imposed limitations, unable to see past the barriers that obscure the possibilities open to us.

This, again, is another instance where our environment can help to work wonders. In a venue like Columbus, where the architectural landscape is peppered with structures that defy convention, one finds oneself surrounded by inspiration. It’s especially interesting to note that such inspiration is found in an artform like architecture, one that has an inherent “structure” in its finished works. When that structure assumes inventive forms, as it does throughout Columbus, it thus shows the myriad ways in which it can take shape, offering us tangible options as to how we might do the same in conceiving and realizing creative new structures of our own. That’s one of the true beauties that conscious creation – and Columbus – have to offer.

As movies go, “Columbus” is a nearly perfect film in virtually every regard. This quiet, cerebral, cinematic meditation gives viewers much to think about, especially when facing life’s hard choices. The film’s exquisite, Kubrick-esque cinematography, ethereal, haunting score, and deft use of sound provide elegant wrapping for this sometimes-humorous, sometimes-heartbreaking, frequently mesmerizing tale. Don’t expect much action from this one; in fact, don’t be surprised if you often find yourself wondering where the story is going, given its often-cryptic dialogue. But sit back, let the film wash over you and take it all in – you’ll likely be very pleasantly surprised, especially by the award-worthy performance of John Cho, who demonstrates talents not seen in any of his previous roles.

Central Indiana may not be the first locale that comes to mind when we think of places to get away from it all. But, then, sometimes we might be pleasantly surprised with what comes out of the unexpected, be it in literal or figurative terms (or both). It’s with that in mind, then, that we should all consider going on explorations of our own to discover the Columbus within each of us – and the new world it represents.