Skip to content
Home/Drama, Movie Reviews, Romance/‘Breathe’ inspires us to vanquish our limitations

‘Breathe’ inspires us to vanquish our limitations

Imagine being confronted by a life of bed-ridden confinement, unable to move or even to inhale your own life-sustaining breath. Add to that the frustration and despondency brought on by an unfeeling health care system that insists upon regimented institutionalization as the only way to address your condition. And, to make matters worse, you’re young and just beginning what’s supposed to be a happy and fulfilling time with the love of your life. If you can picture that, you have an idea of what it’s like to be the protagonist of the new, fact-based romantic drama, “Breathe.”

In 1958 England, tea broker Robin Cavendish (Andrew Garfield) had just met the woman of his dreams, the fair and beautiful Diana (Claire Foy). Despite Diana’s reputation for being something of a heartbreaker, Robin knew that she would one day become his wife. And Diana, despite her sometimes-fickle nature, felt the same way about her new beau. It truly was love at first sight. 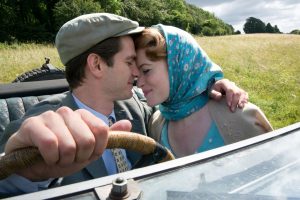 Before long, Robin and Diana were inseparable, even when he would embark on his travels to the wilds of Kenya in search of new tea stocks. Their African adventures together set the tone for the life adventure they envisioned sharing, one that soon included the addition of a child on the way. But, just as life seemed to be growing ever more enriched, Robin was suddenly struck down with polio, the crippling effects of which left him paralyzed and unable to breathe without a respirator. And, despite his youthful vigor, his prognosis was not good – perhaps several months at most, and all of it confined to a hospital bed.

Initially unable to speak and embarrassed by his depleted overall condition, Robin quickly fell into a deep depression, wishing to see no one, including Diana and his newborn son, Jonathan. In fact, he sincerely wanted to die rather than live the way he was, especially since his doctors told him that he’d likely be spending the remainder of his waning days in a hospital ward with other afflicted patients. But, Robin’s despondency notwithstanding, Diana would have none of it. Rather than resign herself to the same kinds of circumstances her husband seemed so ready to embrace, she pointedly asked him what it would take to make him happy so that he would be willing to keep on living. To that, he replied that he simply wanted to go home, a wish that Diana began working on making happen.

When Diana and Robin announced their plans to the medical staff, physicians like the condescending Dr. Entwistle (Jonathan Hyde) labeled their plan foolhardy at best. However, the ever-resourceful Mrs. Cavendish set her mind to bringing her husband home, and Robin soon began leading a comparatively comfortable life in a cozy residential setting.

Once relocated, Robin’s spirits improved markedly, and his condition stabilized. He lasted far longer than the several months initially projected, clearly defying the odds and the experts’ diagnoses. He enjoyed a loving relationship with Diana and had the pleasure of watching Jonathan grow up. And, all the while, he was in the company of many friends, such as his lifelong chum Colin (Edward Speleers), the ever-cheerful, ever-colorful Blacker twins, David and Bloggs (Tom Hollander), and his clever, inventive colleague, Dr. Teddy Hall (Hugh Bonneville), all of whom believed that it was possible for Robin to enjoy a life even fuller than the one he was now leading.

As an amateur inventor and tinkerer, Teddy looked for ways to help make Robin’s life more mobile, an accomplishment he achieved by fashioning a specialized wheelchair fitted with a built-in respirator. With that, Robin was no longer restricted to his bed. He was able to go outside and sit in his garden, as well as take long, leisurely country drives with the family. At one point, he was even able to embark on trips to Spain and Germany. Not bad for someone who once faced permanent confinement. 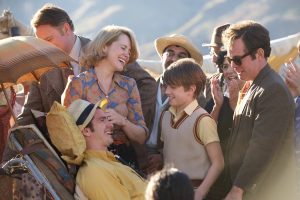 Robin’s expanded mobility eventually led him to become the face of a new cause, one aimed at promoting more liberated lifestyles for other patients similarly afflicted. With the backing of an enthusiastic physician, Dr. Clement Aitken (Stephen Mangan), and the philanthropic support of a wealthy benefactress, Lady Neville (Diana Rigg), Robin helped secure similar equipment for other severely paralyzed patients, enabling them to enjoy the same kind of freedom he had now been basking in for years. It gave him a purpose, not just for himself, but for others, something that no doubt contributed to the decades-long longevity he experienced after initially becoming infected.

The story of Robin and Diana Cavendish inspiringly illustrates a number of principles at the core of the conscious creation process, the philosophy that maintains we manifest the reality we experience through the power of our thoughts, beliefs and intents. Their odyssey together in many ways serves as a textbook for how to employ them.

First and foremost, for instance, the film shows what it means to push through barriers and defy limitations. As conscious creation maintains that we’re ever evolving, in a constant state of becoming, we’re continually meant to get past the obstacles before us to create innovative solutions to our challenges and materialize new conceptions of existence. And Mr. and Mrs. Cavendish clearly excel at this, both individually and as a couple, as well as with the support, guidance and assistance of their peers. They truly push the envelope, showing what’s possible in the face of conventional thinking that would otherwise hold them back. In doing so, they set quite an example for all to see.

Of course, given that conscious creation makes it possible for us to manifest virtually anything we want, one might legitimately wonder why Robin and Diana would materialize circumstances such as these. However, as is the case with virtually all adversity-driven stories, such as those depicted in films like “Still Alice” (2014), “The Theory of Everything” (2014), “Freeheld” (2015) and “Gleason” (2016), the characters’ reasons behind these self-imposed hardships are their own and not for outsiders, like us, to question. These kinds of conditions are frequently associated with particular life lessons, the kind that we might not be able to learn through other sorts of scenarios. In the case of this picture’s protagonists, for example, it could be that they drew these circumstances to them as a means of engaging in the kind of aforementioned limitation-busting activities at which they became so proficient. That naturally leads us to rhetorically ask, would that have been possible without the challenges they set for themselves?

By setting such an example, Robin and Diana were able to inspire others in myriad ways. For instance, thanks to Robin’s ardent advocacy for the revolutionary mobile equipment developed by his friend Teddy, he gave new hope to his fellow polio patients, most of whom were being warehoused in institutions that provided virtually no quality of life. This becomes particularly apparent during his visit to a German facility for the paralyzed, where he’s appalled to see immobilized patients stacked up in a morgue-like holding facility, all very clinical but wholly impersonal and unfeeling. It prompts Robin to make an impassioned plea to the facility’s director, Dr. Erik Langdorf (Sylvester Groth), to implement a more humane approach to treatment, one that incorporates the mobile technology he’s benefited from for years. 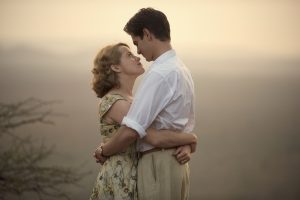 What begins with the hope of a beautiful life together quickly turns challenging for businessman Robin Cavendish (Andrew Garfield, right) and his new wife, Diana (Claire Foy, left), in the fact-based romantic drama, “Breathe.” Photo courtesy of Bleecker Street Media and Participant Media.

By engaging in such fervent, heartfelt promotion for this mission, Robin pursued his own signature brand of value fulfillment, the conscious creation concept aimed at being our best, truest selves for the betterment of ourselves and those around us. By giving voice to a concern that previously had none, he was able to successfully draw attention to it to help improve the life of others who faced the same circumstances as he did. But, then, that shouldn’t come as much of a surprise, given that he himself was the beneficiary of others practicing their value fulfillment, namely, the efforts of his family and friends to make a better quality of life for him. His subsequent efforts were simply his way of returning the favor and paying it forward to advance the condition of others.

The efforts of others to aid Robin also demonstrate the power inherent in acts of co-creation. When we pool our resources and ingenuity, we’re often able to generate truly remarkable results, as evidenced here. By working with Robin – and by Robin summoning to him the right mix of willing and committed collaborators – this collective band of co-creators came together to yield outcomes through which everybody won. And, in turn, such efforts led to the work Robin would subsequently tackle, spiraling the co-creative initiative to an entirely new level and to a grateful new constituency.

Most of all, however, “Breathe” adeptly shows what can stem from the power of love, a potent emotion that can significantly fuel the underlying components of the conscious creation process. Were it not for the love Robin and Diana shared for one another, this story might have easily led to a very different outcome. If Robin had continued to believe that he had nothing left to live for, he may have well fulfilled his physicians’ prognostications and passed on not long after being afflicted. But, because the fair Mrs. Cavendish gave her spouse a reason to live, she helped him change his beliefs and prevailing mindset, an adjustment that prompted more than two decades of additional life, not to mention an existence that proved to be immensely fulfilling personally and as a proponent for patient rights and dignity. That’s quite an accomplishment for someone otherwise immobilized. 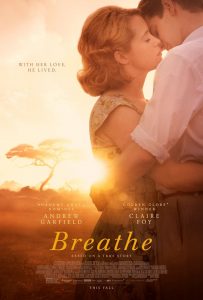 From the foregoing, it’s apparent the film packs quite an inspirational punch, backed by a wealth of valuable metaphysical insights. However, while “Breathe” is undeniably noble and sincere in its intents, this somewhat-overlong offering regrettably falls prey to the traps of schmaltz, manipulation and formula (at times bordering on cliché, especially in its soundtrack and cinematography). Admittedly, the film does tend to get better as it goes along (save for its drawn-out concluding segment) and features capable performances by Garfield and Foy, who clearly make this material look better than it really is. However, despite these strengths, much of the film seems rather familiar and plays more like a made-for-TV movie than a theatrical release (and one with precious little back story to boot). You’ll certainly come away from director Andy Serkis’s debut outing feeling inspired and uplifted, but don’t be surprised if you feel just a little cinematically unfulfilled by this one.

Nevertheless, when faced with challenges laden with seemingly insurmountable limitations, a little inspiration can go a long way in helping us get past such barriers. If you doubt that, consider what Robin and Diana were able to achieve with what they had to work with. But, then again, given the vast store of resources available through the realm of possible beliefs, it should naturally follow that we can accomplish great things when we set our minds to the task. In fact, the results just might take your breath away.