‘Last Flag Flying’ honors the power and beauty of friendship

Saying goodbye is never easy, especially when a parent is forced to do so for a departed child who’s taken unexpectedly and in the prime of life. Under circumstances like these, we can use all of the support we can muster, and those who often prove most helpful are those who have already been through life-and-death experiences with us. Such is the case of a distraught father burying his deceased son in the highly moving new drama, “Last Flag Flying.”

When Vietnam veteran Larry “Doc” Shepherd (Steve Carell) loses his only child in Iraq in 2003, he’s saddled with one of the worst tragedies a parent can face. The pain is palpable, and making the right decisions is difficult. Under trying conditions like this, many of us are at least fortunate enough to turn to our spouses for support, but Larry doesn’t even have that option available, having lost his wife earlier the same year. So, to cope with this tragic situation, he turns to those whom he believes can best relate to what he’s going through – a pair of war buddies with whom he served in Vietnam. There’s just one catch – he hasn’t seen these guys in 30 years. 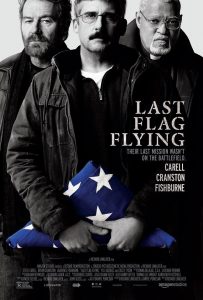 Nevertheless, thanks to an Internet search, Larry successfully locates his military kindreds, Sal Nealon (Bryan Cranston) and Richard Mueller (Laurence Fishburne). Having not been in contact with either of them in decades, Larry is not sure what to expect, but he takes a leap of faith and makes the journey from his home in New Hampshire to Virginia to find his long-lost friends.

Upon arriving down south, Larry finds Sal as a hard-partying bar owner, someone who hasn’t changed much since their days in the service together. Richard, however, has left behind the wild man days of his youth, having become a man of the cloth (but one whose old self is never too far beneath the surface, despite his best efforts to keep that persona in check). And, despite the years of separation, the three friends largely pick up where they left off. The circumstances of their reunion may differ somewhat from those of their past, but they nevertheless involve elements with which they’re all too familiar.

Larry explains his situation and asks Sal and Richard to accompany him to Arlington National Cemetery, where his son is to be buried with full military honors. And so, with varying degrees of enthusiasm and commitment, the trio sets off for the solemn task. But, upon retrieving his son’s body, Larry has second thoughts and decides he wants to lay his boy to rest at home back in New Hampshire. He again asks his friends to join him, after which the trio embarks on an odyssey of emotion, revelation and reconciliation on their way north. 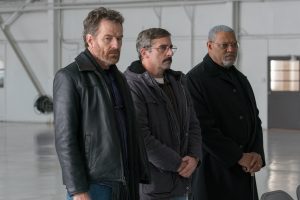 The train trip from Virginia to New Hampshire, with various stops along the way, gives Larry, Sal and Richard an opportunity to become reacquainted, allowing them to relive certain fond memories and to address long-unresolved issues that have simmered for three decades. It also gives each of them a chance to air their views about their respective circumstances, their service, and the government to which they and their peers have pledged their lives. They discuss how they have come to be who they are and what they want going forward. And it’s a time for healing a lot of wounds, both past and present, all in hopes of creating a future of hope, despite the current circumstances.

The anguish of circumstances like these is nearly impossible to imagine. Because of that, one can hardly fathom how any of us would draw conditions like this into our lives, the cornerstone of the conscious creation process, the means by which we manifest the reality we experience through the power of our thoughts, beliefs and intents. In fact, the most we can probably hope for is trying to understand why they happen by analyzing the means that brought them into being. Doing so may well provide some perspective behind how such scenarios come into existence and what they ultimately might mean.

On one hand, for instance, there’s the tragedy itself, one that occurs as a result of actions that unfold during a highly unpopular military conflict, the Iraq war. The loss of Larry’s son takes place at a time when many Americans began questioning the legitimacy and purpose of the country’s involvement in that melee. And, in light of that, to help keep the controversial loss of life under wraps, the government even went so far as to adopt a policy forbidding press coverage of the return of soldiers’ remains, an attempt to effectively sweep matters under the rug. But, despite officialdom’s efforts at concealing the fallout of this controversial campaign, word of the conflict still needed to get out, and sacrifices like those made by Larry’s son ultimately contributed to informing the public about a dirty little secret that the powers that be would have rather disavowed. It’s truly unfortunate that anyone would have to go to such lengths to create such awareness. But, when circumstances warrant drastic steps to make such unpalatable matters known, we’re often forced into creating limitation-bursting methods to achieve the results we seek.

It’s especially ironic that such a scenario involves the son of a Vietnam veteran, someone who was part of an even more unpopular military conflict decades before. Despite widespread public outcry against that war, Larry and his colleagues served at a time when military-eligible citizens more readily believed in the integrity of the government and its contention that the conflict was a noble pursuit. However, through their wartime experience, they became disillusioned, something that caused them to quietly question their involvement in the years after their service. And now, as Larry is confronted with the loss of his son in an equally questionable conflict, those long-repressed doubts he and others like him have held about the wisdom and legitimacy of such military involvements come rushing forth to the surface, an opportunity to make their beliefs known and available for sharing with others of like mind. In doing so, the consensus-driven, protest-based beliefs of individuals like Larry are given expression, something that might not have occurred were it not for such unfortunate circumstances. This is particularly crucial when it comes to changing the minds and making advocates out of those who may have one time seen the truth but denied their true feelings. 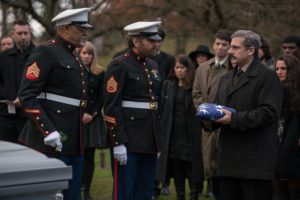 All of these considerations point to the power of co-creation, the means by which we pool our manifestation resources to accomplish jointly sought goals. This is certainly apparent in the efforts aimed at raising public awareness discussed above. But it’s also present on a more personal level, such as Larry’s attempts at renewing contact with two old friends, individuals well positioned to help him get through his personal crisis. It’s also an opportunity to resolve old issues that have gone unaddressed for years, something that can help bring closure to lingering wounds and, one would hope, put the three friends on a firmer footing for the future, one that can help them renew and strengthen their existing bond – the kind of friendship we all hope to make part of our lives.

The experience of Larry, Sal and Richard indeed embodies the notion of how to look for the silver lining in the proverbial clouds of our lives. It may not be a particularly easy process, but the outcomes can yield tremendous dividends, both personally and on a wider basis. Drawing from the lessons of these circumstances can be life-changing – and life affirming – in so many ways. Despite the difficulty of these situations, we should not fear them, for there’s no telling what they ultimately might yield. The results may well surprise us – and in ways we can hardly imagine.

This latest offering from director Richard Linklater is a truly moving cinematic experience that’s not to be missed. With a rollercoaster of emotions and an intriguing road trip narrative somewhat reminiscent of “The Last Detail” (1973), “Last Flag Flying” takes viewers through an array of feelings and moods from tremendous hilarity to profound sadness, and nearly always seamlessly. Most of all, however, the film features three of the strongest male lead performances to come along in quite a while (kudos to the casting director for skillfully choosing Carell, Cranston and Fishburne for their remarkable portrayals and their unbelievable chemistry). Admittedly, the picture gets off track a few times, going on several needless tangents, but overall this strong, solid film is well worth one’s time. Just keep the handkerchief within reach.

An emotional catharsis of this order can be difficult to go through, but it’s often necessary to help us get where we want to be. Having good, old friends in our corner – especially those who are familiar with the types of conditions involved here – can prove invaluable for working our way through such experiences. Let us all hope we have companions like them available to us when we need them.