‘The Square’ urges us to live up to our intentions

What does it mean to truly care for one’s fellow man? Some would contend that it involves more than just paying lip service to the notion or writing a check to a beloved charity; rather, they would say, it entails getting actively involved in bettering the well-being of others. But are we genuinely equipped to engage in such an activity? And, if so, what exactly does it take? Those are among the questions raised in the unusual and provocative new Swedish satire, “The Square.”

Christian (Claes Bang) is the respected curator of a Stockholm contemporary art museum. He prides himself on staging exhibits that make people think – not just about the art on display, but also about the messages it’s attempting to convey. He’s especially excited about his newest exhibit, The Square, a show symbolized by the simple four-sided figure and explained by the following inscription: “The Square is a sanctuary of trust and caring. Within it we all share equal rights and obligations.” It’s a noble sentiment, one that Christian hopes will inspire the exhibit’s visitors to pursue increased acts of altruism and goodwill toward their fellow man. 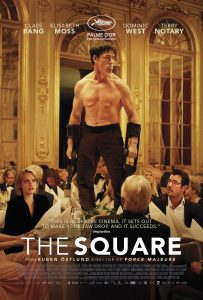 Given his position, Christian has been very successful, and he relishes the fruits that have come from his efforts – a comfortable lifestyle with all the trappings of accomplishment. In fact, he’s grown so accustomed to this way of life that sometimes it clouds his vision, causing him to periodically lose sight of other priorities, including the mission behind his work. While Christian generally strives for a balance between his professional and personal life, sometimes things nevertheless get out of kilter – such as when he’s the victim of a pickpocket incident through which he loses his wallet and cell phone, the essential life lines to his lifestyle.

The loss of these items so distresses Christian that he quickly loses all perspective. He becomes so preoccupied with retrieving the lost goods that he resorts to outlandish schemes, such as those suggested by his co-worker Michael (Christopher Læssø), to get them back. As a consequence, he begins shirking his responsibilities in other areas of his life, such as overseeing his obligations for the staging of The Square. What’s more, the divorced father even forgets about the regularly scheduled weekend visitation of his two daughters (Lilianne Mardon, Lise Stephenson Engstrom), who show up on his doorstep surprised that he didn’t remember they were coming. As matters play out, circumstances go from bad to worse as Christian loses his grip on his priorities in the wake of chasing down his material obsessions. 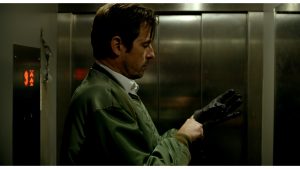 Christian (Claes Bang), a successful contemporary art museum curator, goes to great lengths to recover his stolen wallet and cell phone when he’s the victim of a pickpocket incident in the unusual new Swedish satire, “The Square.” Photo courtesy of Magnolia Pictures.

Christian’s conundrum over what he actually does versus what he espouses that he (and we) should do soon escalates. Because of this, he’s quickly faced with having to put out more fires than he can possibly handle, with consequences that grow ever more complicated. In his professional life, for example, he must explain his lack of awareness of the release of an ill-advised promotional video for The Square, one that simultaneously raises questions of social propriety and freedom of speech. Personally, meanwhile, he struggles to cope with the histrionics of a would-be romantic interest (Elisabeth Moss) who’s obsessed with turning their casual involvement into a social cause, one that some would say reflects an institutionalized form of sexual exploitation while others would say is simply an interpersonal misunderstanding blown out of proportion.

How will things work out for the beleaguered protagonist? Will circumstances get straightened out, or will they continue to spiral out of control? Will Christian regain his perspective, or will he become irretrievably overwhelmed? Will he grasp the lessons of his own exhibition, or will he remain mired in what some might say is his own hypocrisy? Those are a lot of questions to be answered.

When we claim to be proponents of particular points of view, it’s a safe bet that we’ll be called on our commitment to them at some point. That’s because these contentions are beliefs, the building blocks of our reality according to the conscious creation process, the philosophy that maintains our existence comes into being as a result of them. And that’s the issue Christian is now wrestling with: Does he really believe in actively furthering the aspirations of his art exhibits, such as the benevolence and egalitarianism advocated by the spirit behind The Square? Or is he content just to talk about these ideas from an ivory tower perspective, placing more attention on the features and functions of his technological toys than engaging in hands-on initiatives designed to help those genuinely in need of assistance? 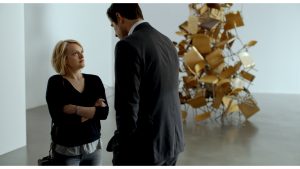 Given Christian’s dogged pursuit of his lost items, it becomes pretty apparent where his priorities lie, at least initially. But will he be able to maintain that stance? And, if so, for how long? As the beliefs he says he maintains bubble up to the surface from the depths of his consciousness, the discrepancy between his so-called contentions and his overt actions becomes increasingly obvious. His personal belief integrity thus gets put to the test, forcing him to address the question, does he really believe in what he says he believes? And, if so, is he willing to employ those notions as part of his day-to-day activities?

The longer Christian ignores this situation, the more the problem persists, both in his conflicted consciousness and in the externalized expressions of his everyday existence. It simply won’t go away, as unwanted and unforeseen side effects related to the foregoing core questions begin to pile up. Incidents eventually compound one another and spill over into other events and exhibits at the museum, such as a formal banquet for patrons where the antics of a talented but all-too-committed performance artist (Terry Notary) get seriously out of hand. Meanwhile, outside of work, as a result of Christian’s desperate attempts to retrieve his possessions, an innocent young boy is erroneously branded a thief by his parents, an accusation that prompts the youth to then aggressively take out his frustrations on Christian.

So how should Christian respond to eliminate these problems? For starters, he needs to acknowledge his beliefs for what they are, ridding himself of the denial that’s leading to an endless cycle of complications. Then he needs to bring his actions in line with his beliefs, a sure-fire way to dispense with the ever-mounting hurdles amassing in his life. In both of these instances, he needs to live up to his beliefs, taking action to realize them and not just noting them as passing observations.

Perhaps most importantly, though, Christian needs to let go of his penchant for pushing the Universe, ditching his wrong-headed attempts at forcing our divine collaborator in the conscious creation process to bring about results that aren’t meant to be. This is most apparent in his efforts to retrieve his possessions. Maybe they were swiped and are being held at bay in an effort to get him to shift his focus and place it on something other than his smart phone settings, a scenario that he ultimately created as a means to force himself into adopting a new set of priorities – that is, as long as he grasps the message behind why these events have unfolded as they have. But, as long as he fails to acknowledge this, he’s likely to continue incurring the same kinds of problems he’s been experiencing. Given that, being willing to consider new possibilities seems far simpler comparatively speaking. 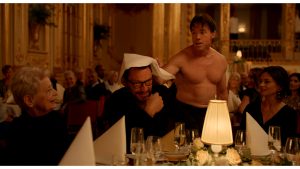 Performance artist Oleg (Terry Notary, standing) gets carried away with his antics at a banquet for museum patrons in the unusual new Swedish satire, “The Square.” Photo courtesy of Magnolia Pictures.

As with director Ruben Östlund’s other films (such as “Force Majeure” (2014)), “The Square” is a picture with a lot to say, a quality that won it the Palme d’Or at this year’s Cannes Film Festival, the event’s highest honor. Its attempts at covering so much ground are indeed laudable, especially in the highly innovative ways it addresses its material. Yet, despite such an ambitious approach, the film doesn’t always convey its ideas as well as it could. In its moments of inspired clarity, the director absolutely knocks it out of the park with inventive, riveting humor – big, hilarious satirical episodes that arise organically and pointedly impart significant social insights. However, this strength notwithstanding, sometimes it takes the filmmaker a little too long to get the audience from laugh to laugh, a problem that could have been resolved with some judicious editing. Nevertheless, if you’re able to sift through the flotsam to find the picture’s kernels of wisdom, you’ll be richly rewarded with an unusual and memorable movie experience.

All too often, others say to us “Do as I say, not as I do,” when a simple, genuine “do as I do” would suffice (and be more meaningful). “The Square” makes an impassioned plea for us to do just that. If we and our contentions are to be taken seriously, we’d be wise to get our beliefs in order and act on them accordingly.