Seeking justice can be a slow, tedious process that severely tries one’s patience. The frustration that sets in can weigh heavily on those who want their wrongs righted, perhaps pushing them to take desperate measures. But, as understandable as those circumstances are, is the pursuit of such drastic steps truly warranted? Will they get the sought-after results? Or will they only compound matters, making things worse for all involved? Those are the unsettling issues addressed in the new dark comedy, “Three Billboards Outside Ebbing, Missouri.”

Divorced single mother Mildred Hayes (Frances McDormand) leads a life of quiet desperation. Coping with the brutal death and sexual assault of her daughter, Angela (Kathryn Newton), seven months ago tears at her soul. But what’s more frustrating for Mildred than the loss itself is the lack of apparent progress on the investigation by the local sheriff, Chief Willoughby (Woody Harrelson). So, drawing on the belief that turning up the heat on police officials will spur greater efforts to resolve the case, Mildred takes a dramatic step. She decides to rent three long-abandoned, closely spaced billboards on one of the roads leading into her hometown of Ebbing, Missouri, and on them she posts pointed messages directed at Chief Willoughby, asking why no suspects have been identified, arrested and prosecuted. 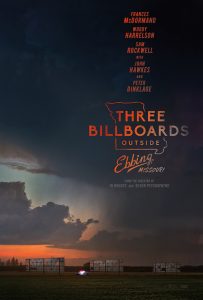 Understandably, Mildred’s plan proves quite controversial. The sheriff does his best to remain calm and collected, even going so far as to make assuaging overtures to Mildred to explain the difficult circumstances involved in this investigation. But the backlash doesn’t stop there; although many local residents sympathize with Mildred’s loss, they also believe that her efforts at calling out the sheriff in such a publicly humiliating way won’t solve anything and is patently insensitive toward him, given that he’s wrestling with personal issues of his own. Mildred’s plan draws particular ire from members of the local police force, most notably Deputy Dixon (Sam Rockwell), a hot-headed problem drinker who takes the criticism against the sheriff and his staff personally and resorts to drastic retributive measures of his own. Even members of Mildred’s own family, such as her son, Robbie (Lucas Hedges), and ex-husband, Charlie (John Hawkes), find her actions questionable, leading to a variety of reactions from gentle criticism to vile threats.

But Mildred is steely in her resolve, never backing down when confronted by those who try to intimidate her. In fact, the more the heat gets turned up on her, the more she fights back, be it through her caustic, profanity-laden tirades or through actions that are even more radical than the posting of her billboard messages. In the end, however, one can’t help but wonder whether her actions are justifiable, particularly when it becomes unclear how effective these measures are.

As becomes readily apparent, Mildred is indeed a force to be reckoned with. She knows what she wants to achieve, and she steadfastly sets out to accomplish it. That’s because she has resolute command over her beliefs, the means by which we manifest the reality we experience through the conscious creation process. And, because of this, she’s clearly someone not to be messed with. 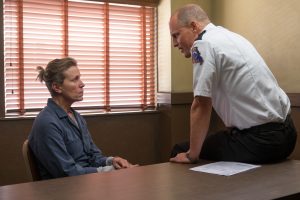 In managing her conscious creation skills, Mildred has developed a mastery over the elements involved in belief formation, the intellect and intuition. Intellectually, for example, she has a clear handle on what it takes to get results – namely, applying pressure to those in charge, a belief she’s formed through her research of police investigation tactics and statistics. And, intuitionally, she listens to her gut when she spies the abandoned billboards and gets the impulse to make use of them to pursue the outcome she seeks. By effectively drawing upon both sources of inspiration in belief formation, she becomes a proficient conscious creation practitioner.

Mildred enhances these practices by other means as well. For instance, in true conscious creation fashion, she has no hesitation to push past limitations that might otherwise hinder her efforts. By renting the billboards and putting the authorities under the microscope, she draws upon an unconventional, limitation-bursting technique to get results. Of course, this would not happen were it not for her willingness to push past fears, self-imposed obstacles that could otherwise inhibit her effectiveness and dilute her results. This becomes apparent, for example, when she stands her ground in the face of strong local opposition to her plans, something that those less galvanized in their beliefs might not be able to withstand. 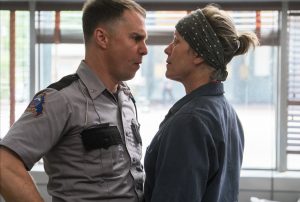 However, at the risk of playing devil’s advocate, one might also wonder, if Mildred is so effective as a conscious creator, then why hasn’t she realized a more satisfying and definitive conclusion from the police investigation? What’s more, as the story plays out, it seems that her plan to turn up the heat on the authorities does more to create public discord than to get results. This might even lead one to rightfully believe that her billboard scheme was fundamentally ill-conceived in the first place.

That argument certainly has merit. From a conscious creation standpoint, Mildred’s actions could be seen as an example of pushing the Universe, a practice whereby we try to force our divine collaborator in the process to produce results that either weren’t meant to be or were intended to manifest differently, either in terms of time frame or form of outcome. We may think we know the best way to achieve a particular goal, but, given that certain elements may need to be satisfied to arrive at the desired destination, our collaborator might have a better, more effective plan to get us there. And, if we try to push the Universe, it may well push back, thwarting our efforts at realizing the sought-after goal and potentially seriously compounding the frustration we’re already experiencing.

Such circumstances are particularly germane to situations that involve co-creations, as is the case here. Mildred may feel as if she’s in this battle by herself, but, when examined more closely, it’s obvious there are other players in this scenario, including the police force, the perpetrator and residents of the local community. Their “contributions” to the unfolding of this drama must be allowed to play out, which could mean that what Mildred wants may have to be put on hold, at least until those other elements fall into place. That’s not to suggest that her goal won’t eventually be achieved; however, it might take an unanticipated or protracted route to get to the desired outcome, something that Mildred may not like but that she’ll have to live with if she wants to see justice done. But, at the same time, pushing the Universe won’t get us what we want, particularly when other interests are involved and have to be addressed. 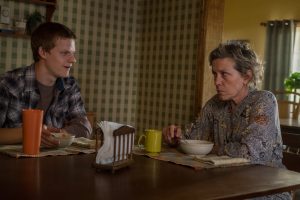 This is where the power of faith comes into play in conscious creation. If we believe in the process, are clear about what we want and are willing to let our divine collaborator lead us to the sought-after result, we’ll likely see what we want achieved. This is a lesson for Mildred and may well account for why matters pan out as they do. It may not be the most satisfying way to arrive at where we want to be, but it’s often necessary on our way to becoming effective conscious creators.

Director Martin McDonagh’s dark comedy, with its ample, in-your-face gallows humor and unrelenting sailor-inspired vulgarity, takes big chances on its way to easily becoming one of the best releases of 2017. With stellar performances by McDormand, Harrelson and Rockwell, the picture keeps us guessing, even when we think we’ve figured things out, using misdirections to keep viewers captivated throughout. Despite a slight tendency to drag in the second half, the film overall is a flat-out winner, though it’s definitely not something for sensitive or squeamish viewers.

“Three Billboards” is easily a strong contender in this year’s awards competitions. It’s already picked up some notoriety, having earned three Independent Spirit Award nominations for best screenplay and for the impressive performances of McDormand and Rockwell. Look for this film to earn more kudos as awards season progresses. 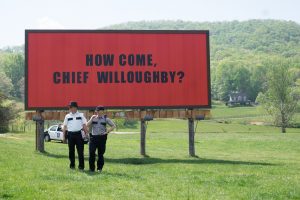 It’s been said the wheels of justice turn slowly, and that can be true even when the conscious creation process is employed. However, the more we stay focused on realizing an equitable outcome, supported by beliefs to make it possible, the greater the chances of seeing those hoped-for results come to life. After all, it’s only fair, and the Universe has a way of generally leaning in our direction – provided we work with it to see things through.