Most artists would agree that they seek to garner acclaim by producing quality work, creations applauded for their many noteworthy attributes. But sometimes artists achieve notoriety for their disastrous efforts, works that are so stunningly awful that they earn praise for their utter detestability. In the case of filmmakers, such dismal efforts often lead to their productions becoming cult classics, movies that are loved for how relentlessly bad they are. And one such example provides the basis for the hilariously off-beat new fact-based offering, “The Disaster Artist.”

When aspiring but eminently insecure actor Greg Sestero (Dave Franco) befriends an enigmatic classmate from his San Francisco acting studio, he has no idea what he’s getting himself into. But, as someone seriously in need of bolstering his self-confidence, he’s highly impressed by the inventive though exceedingly unconventional work of fellow actor Tommy Wiseau (James Franco). Although most of Tommy’s performing work defies description and many of his observations consist of cryptic, nonsensical, stream of consciousness statements, Greg nevertheless believes that he can learn something from his eccentric peer. They begin spending a lot of time together – much of it devoted to Greg trying to figure out what Tommy’s often-incoherent ramblings mean – but the impressionable Mr. Sestero seems to get out of it what he wants (at least initially). 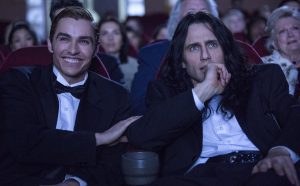 At the premiere of their film “The Room,” actor Greg Sestero (Dave Franco, left) and director Tommy Wiseau (James Franco, right) have different reactions to the audience response to their offering, as detailed in the off-beat new fact-based comedy, “The Disaster Artist.” Photo by Justina Mintz, courtesy of A24.

Surprisingly, despite his pervasive inscrutability, Tommy actually has much to offer, at least in terms of the resources at his disposal. For instance, he appears to sit on a pile of cash, and he has residences in both the Bay Area and Los Angeles. Such circumstances eventually make it possible for Tommy to bankroll a relocation to Hollywood for himself and his new friend, an initiative that they believe will help them step up in their careers. However, despite such optimism, circumstances don’t quite pan out as hoped for. For example, even though Greg lands an agent (Sharon Stone) upon arriving in L.A., he fails to impress casting directors. And, for Tommy, things go even worse, mainly because no one can figure him out.

With their hopes dashed and careers flagging, Tommy comes up with the idea to write his own script for a movie starring Greg, quickly completing the screenplay for a domestic drama titled “The Room.” And, given his considerable finances, he soon hires a cast (Ari Graynor, Jacki Weaver, Zac Efron, Josh Hutcherson, Jason Mantzoukas, Andrew Santino) and crew (Seth Rogen, Paul Scheer, Charlyne Yi, Kelly Oxford) to make the film. With everything in place, the project seems all set to go. But, as quickly becomes apparent, the production is a disaster come to life:  the 40-day filming schedule swells out of proportion; many scenes (primarily those involving Tommy) require numerous takes to shoot; most of Tommy’s direction makes little sense, alienating the actors and crew; and some of the director’s creative decisions are of questionable taste.

As the shoot drags on, relations between Greg and Tommy become strained. Tommy resents Greg spending increasingly more time with his new girlfriend, Amber (Alison Brie). He also blocks Greg’s efforts at securing a bona fide acting job on an episode of the sitcom Malcolm in the Middle thanks to a chance meeting with actor Bryan Cranston (playing himself). The once-strong (though admittedly inexplicable) bond gets torn apart. 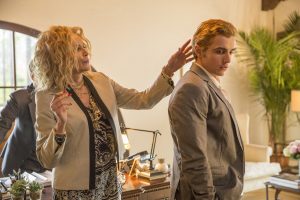 Aspiring actor Greg Sestero (Dave Franco, right) is thrilled, if a bit uncomfortable, at landing the services of an agent (Sharon Stone, left) upon his arrival in L.A. as documented in the off-beat new comedy, “The Disaster Artist.” Photo by Justina Mintz, courtesy of A24.

With the production coming to an end, it’s unclear what the future holds. For his part, Greg (like many of the cast and crew members) wants to walk away, hoping that no one ever sees the celluloid debacle. He returns to San Francisco to resume his acting career, achieving moderate success on stage. He seems happy and well-adjusted once again – that is, until he learns of the big premiere Tommy has planned to launch the theatrical release of “The Room.”

Not surprisingly, the reaction to Tommy’s film is anything but what he expects. He’s mortified by the howls of audience laughter echoing throughout the theater. But, little does he realize, he’s on his way to a sleeper hit – even if it’s not the success in the way he envisioned.

As Tommy’s experience illustrates, sometimes life hands us some big surprises. But, even though success may not assume an anticipated form, it’s success nevertheless. The question for us then becomes, can we recognize and appreciate it for what it is, even if unexpected? This is one of those situations where we can view the glass as half full or half empty. What we choose, of course, is up to us, but, no matter which choice we make, we should decide carefully.

This comes down to a question of beliefs, the cornerstone of the conscious creation process, the means by which we manifest the reality we experience. Our belief choices determine the outcomes we realize, and they afford us an infinite range of possibilities for experience at any given moment. The question here, of course, is, will we recognize and understand the true nature of the results when they materialize? Will we appreciate the essence of their being? Or will we misinterpret matters and view them from a skewed perspective (something else fundamentally governed by our beliefs)?

Understanding and appreciating what manifests calls upon us to tap our power of discernment, our capability for recognizing the true nature of what appears before us. This might seem like a fairly straightforward process, but sometimes our view can become clouded by assumptions and various other belief considerations, distorting our analysis of our circumstances. This camouflage can obscure our outlook, leading us to conclusions that aren’t entirely accurate. 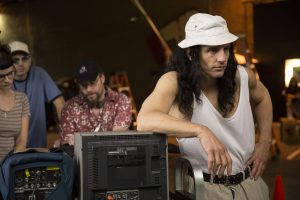 On the set of his film “The Room,” writer-director Tommy Wiseau (James Franco, foreground) often rambles incoherently, confusing his cast and crew, as depicted in director James Franco’s “The Disaster Artist.” Photo by Justina Mintz, courtesy of A24.

In Tommy’s case, for instance, it’s understandable how he might interpret the chorus of chuckles ringing out at his film’s premiere as an insult, especially if he unquestioningly assumed that his project was something to be taken seriously. However, given the laughable nature of the picture, the audience responded in kind, achieving what the film – and, ultimately, its creator – must have had in mind all along, even if not consciously recognized as such. In that regard, Tommy achieved “success” in his endeavor, even if it came in a form he hadn’t necessarily intended.

Conscious creation practitioners sometimes refer to situations like this as examples of semi-conscious creation, where the desired outcome is achieved, even if it’s not perceived as such or takes a form different from what was expected (but nevertheless embodies the sought-after qualities). In working through these instances, we may experience disillusionment or confusion, but these qualities can indeed be overcome, particularly when we employ the aforementioned power of discernment. We can also increase our level of understanding by making greater and more effective use of our intuition, one of the two elements that loom largely in belief formation and assessment.

Tapping into our intuition seldom comes easily for many of us. We tend to tune it out, because it’s seen as less logical, less rational than our intellect, the other chief element used in belief formation and assessment. As a consequence, our intuition is viewed as less reliable, less trustworthy and, hence, easily dismissible. Nevertheless, intuition can often shed significant light on our beliefs and resulting circumstances, helping us grasp what’s really before our eyes.

Again, drawing from Tommy’s example, he initially fails to see his situation for what it is (somewhat unusual for someone who, prior to the film’s premiere, seemed to follow his gut instincts perpetually, no matter how incoherent the resulting actions and observations of his musings may have been). It takes Greg’s astute intuitional observations about what transpires to help Tommy see things for what they are. Were we to follow this lead, we might all find ourselves developing better understandings of the nature of our beliefs, our existence and why matters unfold as they do. And there’s certainly no disaster in that. 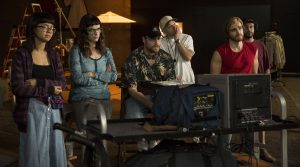 On the set of director Tommy Wiseau’s “The Room,” script supervisor Sandy Schklair (Seth Rogen, center) and actor Greg Sestero (Dave Franco, second from right) cringe whenever the filmmaker makes one of his unpredictable on-screen appearances in the off-beat new comedy, “The Disaster Artist.” Photo by Justina Mintz, courtesy of A24.

Despite a half-baked teaser trailer that makes this project look like an inside joke drummed up by frat boys between bong hits, this quirky fact-based comedy is surprisingly entertaining, if a bit dragged out in spots. A more fully fleshed out back story probably would have helped, too, but then that may have also undermined the portrait of inscrutability being painted about the story’s protagonist. Nonetheless, the film delivers surprisingly well in the performance department, with fine turns by the Franco brothers and an array of colorful supporting cast members, punctuated by the tongue-in-cheek observations of Hollywood heavyweights like J.J. Abrams, Kevin Smith, Keegan Michael Key, Danny McBride and Kristen Bell. All in all, “The Disaster Artist” is a delightfully pleasant surprise that, upon first glance, would seem to have little to offer. 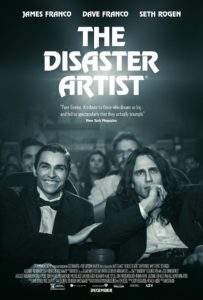 Being misunderstood may cause us considerable consternation. But misinterpretations of our intents just might pay unexpected dividends as well. We may be frustrated at what transpires, but we could also find ourselves laughing all the way to the bank. If you doubt that, just ask Tommy Wiseau.