Saying goodbye is never easy. The pain and sorrow can be a lot to bear, even under the “best” of circumstances. But, when the situation becomes burdened by considerations that have no business intruding upon such a difficult process, the result can be unendurable. Such are the conditions addressed in the compelling new Chilean drama, “A Fantastic Woman” (“Una mujer fantástica”).

Businessman Orlando Onetto (Francisco Reyes) leads what appears to be a fairly comfortable life in Santiago. The 57-year-old runs a successful company and lives in a moderately upscale home. He also enjoys the companionship of his significant other, Marina (Daniela Vega), a beautiful, aspiring vocalist many years his junior with whom he’s developing a blossoming romance. 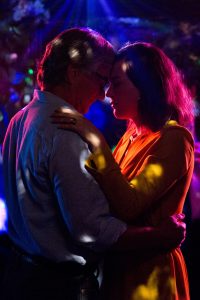 As the film opens, Orlando and Marina celebrate her birthday with dinner, drinks and dancing. She’s especially touched when Orlando tells her he’s planned a romantic getaway for the two of them. In many ways, they share a perfect evening.

But, after returning home, circumstances take a drastic turn. Orlando awakens feeling ill, not sure what’s wrong bur definitely not himself. He struggles to stand up, quickly collapsing, after which Marina rushes him to the hospital. But, despite the medical staff’s efforts to stabilize his condition, Orlando dies of an apparent aneurism. Suddenly, Marina is left to sort out matters, a task that proves easier said than done. The reason: Marina, as it turns out, is “the other woman,” the love for whom Orlando abandoned his family and longtime wife, Sonia (Aline Küppenheim).

Needless to say, relations between Marina and Orlando’s family are anything but cordial. To help matters proceed as smoothly as possible, Marina contacts Orlando’s brother, Gabo (Luis Gnecco), the relative who seems most accepting of (or, more precisely, least hostile toward) the woman they blame for breaking up the family. Gabo says he’ll handle all the necessary arrangements, but, before long, others – like Sonia and Orlando’s adult son, Bruno (Nicolás Saavedra) – get involved in things, and neither of them is nearly as conciliatory. To her credit, Sonia tries to put on a civil face and to be as diplomatic as possible, even offering to compensate Marina for any inconveniences she’ll incur as a result of Orlando’s passing. But there’s one point on which Sonia has no flexibility: She insists that Marina not attend Orlando’s memorial service or funeral, because the family wants to suffer no further embarrassment from her presence in their lives. Marina is thus forced to grieve by herself, with no formal opportunity to say goodbye.

Aspiring vocalist Marina Vidal (Daniela Vega) must confront herself and her own identity under trying circumstances in the new Oscar-nominated drama, “A Fantastic Woman” (“Una mujer fantástica”). Photo courtesy of Sony Pictures Classics.

However, as soon becomes apparent, the family’s hostility toward Marina has to do with more than just her unwanted involvement with Orlando. To say more would reveal too much, but suffice it to say that she possesses qualities that the Onetto family finds objectionable, traits that made Orlando’s philandering more painful for them to endure than what others similarly situated might typically experience. But is the family justified in taking such a hostile stance? Or are they falling prey to outmoded, close-minded prejudices? Either way, Marina is left with having to face her grief alone under circumstances where her personal dignity, self-confidence and even her very identity are called into question, compounding her pain at a time when she least needs to be saddled with additional anguish.

Despite these obstacles, though, Marina remains steadfast in her resolve, both to say a proper farewell to her beloved and to assert her personal integrity. She thus boldly and courageously demonstrates what it means to confront the challenges that would hold her back from achieving her goals and maintaining an empowered sense of self. She makes it plain for all to see what a truly fantastic woman she really is.

To say that Marina is in a difficult spot would indeed be an understatement. The pain of losing her partner is traumatic enough, but to suffer the humiliation, callousness and degradation thrust upon her by Orlando’s family on top of that is gut-wrenching and demoralizing. What’s to be gained from such actions? For some, that may be hard to say. But, for those who follow the principles of conscious creation – the philosophy that maintains we manifest the reality we experience through the power of our thoughts, beliefs and intents – there may be something to be said for them, as long as the underlying materialization means are properly understood.

At first glance, Marina’s situation is one that no one should have to – let alone would want to – endure. Sometimes, though, if change is ever going to come about, examples must be set, and they must be visible enough for others to see, especially when a sense of justified outrage is to be unleashed. And, to bring about such results, “volunteers” are needed to step forward and pave the way. Those heroic figures may not be consciously aware of what they’re doing, and they may often find themselves bewildered when they wind up in the midst of such circumstances. However, their impact is often considerable, and, when they begin to see what effect they’re having, they often become emboldened by their efforts, galvanized in their resolve to see their desired goals come to fruition.

In Marina’s case, she’s clearly put through the wringer, more so than she probably ever envisioned when she began this personal odyssey. Yet, no matter how difficult her situation becomes, she remains determined to forge ahead, to overcome her fears and the challenges placed before her. And, in doing so, she provides the example that others need to see to get past their own limited beliefs, to help pave the way for a new way of looking at things. That’s quite an accomplishment and one hell of a creation.

Along the way, individuals in these circumstances stand to benefit personally, too, strange as that may seem on a cursory glance. These scenarios provide the means for learning valuable life lessons. They also enable the protagonists at the center of them to grow personally, both in terms of building up one’s courage, as well as in learning things about themselves that they may have never previously known (qualities, for example, that feed directly into the development of Marina’s musical career). They may thus find themselves able to tap into skills and abilities that they didn’t know they possessed. They may also access parts of themselves that allow them to set new courses for the future. And they may accomplish tasks they never dreamed possible. Getting there may not be easy – perhaps even full of various pitfalls along the way – but the results could prove more than worth it, both for themselves and for others facing similar conditions. Considering what Marina is up against, one can’t help but see the value in the benefits that come from her efforts. 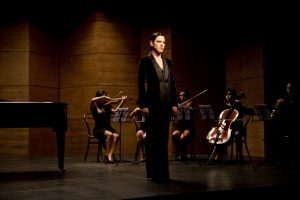 Launching a successful musical career is one of many challenges faced by Marina Vidal (Daniela Vega) in the new, Oscar-nominated drama, “A Fantastic Woman” (“Una mujer fantástica”). Photo by Michelle Bossy, courtesy of Sony Pictures Classics.

Even though it sometimes feels as if director Sebastián Lelio is needlessly stringing viewers along and leaves some of the narrative’s story threads unresolved, this intriguing offering from Chile delivers a fresh twist on the other woman genre, one that’s somewhat unexpected and features previously unexplored plot devices. With a fine debut lead performance by Vega, the story captivates the further one gets into it, leaving viewers wondering how it’s all going to end up. It’s unfortunate that some of the aforementioned tidying up is left unattended to, though, for, if it had been, this might have been a truly groundbreaking cinematic release.

For its efforts, “A Fantastic Woman” has drawn considerable critical praise and its share of awards season honors, including Oscar, Golden Globe, Critics Choice and Independent Spirit Award nominations for best foreign language film. In addition, the picture was named one of the top five 2017 foreign films by the National Board of Review. 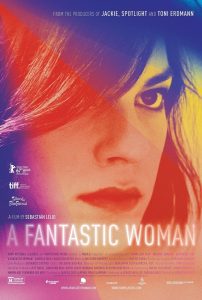 Regardless of how one might feel about the morality of Orlando’s and Marina’s behavior, the film nevertheless makes plain its viewpoint on an individual’s right to grieve the loss of a loved one. It also shines a spotlight on the questionable practice of shaming someone for who he or she is, especially in a time of sorrow. No one deserves to be treated so callously, and we should always bear that in mind, no matter who they are.